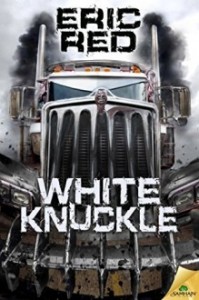 Horror veteran Eric Red brings all of his prodigious storytelling powers to bear in his newest novel, White Knuckle. The title may reference the ways a driver curls their fingers around the wheel but the reader will find the novel has the same effect on their fingers around this book. Eric Red first took horror to the highways back in 1984 when he wrote the screenplay for the horror classic The Hitcher.

White Knuckle is a contemporary tale of a long-haul trucker serial killer and the FBI Special Agent out to stop him. Sharon Ormsby is a new Agent with the Bureau assigned to the Highway Serial Killer Initiative when she discovers a pattern among dead women found along the nation’s highways. The problem is that the bodies are separated by thousands of miles and more than twenty years. Can there really be a serial killer out there who has been using the interstate highways as a killing field for such a long time, can there be someone out there that dangerous? I’m not giving anything away when I say that there is, and that things are worse than anyone could have imagined.

While the novel is punctuated by brutal violence and high action, it’s really powered by its characters. Ormsby is an effective protagonist that really comes to life, a strong and smart woman with a real life and a past that she will have to confront. The action of the story rests on her able shoulders. The supporting cast is small but important to the story, with the ex-con trucker Rudy being a real stand-out. And the villain, when he’s revealed, is positively nasty. And, as fans of The Hitcher know, with Eric Red you can’t be sure what the future has in store for any character, and you can’t get comfortable with anything or take anyone’s fate for granted.

The action is positively over-the-top but vividly written. There are times when it requires the reader to suspend their disbelief, as do some of the more gruesome scenes of violence, but the characters keep the story rooted in some semblance of reality. White Knuckle is absolutely compelling reading, and until the end charges forward like a runaway eighteen-wheeler.