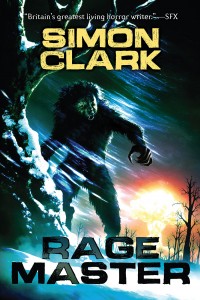 Autumn and the Halloween season bring a lot of fun things, and the Earthling Publications Halloween Series novels are near the top of that list. The consistently great series continues this year with a new novel from British horror icon Simon Clark. Rage Master can best be described as a very original approach to the mythology of the werewolf, unique to the point that werewolf isn’t a very accurate term for it, but it’s the closest word there is.

The narrative is told from two perspectives, that of Kavell, who narrates most of the novel from the first person, and through documents written after the events of the novel have concluded, looking back in retrospect.

The book kicks off with an excerpt from the fictional recounting of the books events, “Operation Wolf – The Secret Kill.” It tells of how the Russian government, under Stalin, tried to eradicate an entire group of people, or possibly animals, called Dog-Heads by dropping an atomic bomb on their community in 1962. This book is referenced throughout the novel to augment Kavell’s story, as is the transcript from the Stockholm Inquiry, an international gathering to discuss the situation after its conclusion.

Kavell tells the majority of the story, how he and his fellow Dog-Heads have been hunted and in hiding and on the run from various world governments for generations. Dog-Heads are not werewolves, they don’t physically transform and the full moon has no effect on them. They are lupine in other ways, especially in the formation in their facial features, having a more sloped forehead and a more protruding snout. The differences are clear between them and humans, but not so much that most Dog-Heads can blend in with humans if they take precautions.

The most animalistic characteristic of the Dog-Heads is when they go into the Rage. When they Rage they become killing machines, willing to tear up anyone or anything that isn’t a fellow Dog-Head. This is the reason they have been hunted so long and so hard. They present a possible threat with their innate killing abilities, but they also present a possible advantage if they can be harnessed for military use.

The story involves the Dog-Heads being hunted and having to survive on the run, first from Romania and into France. In the contemporary world of the novel there is a mass movement of refugees from the Middle East and Africa through Europe and into France. The Dog-Heads find themselves caught up with the refugees trying to make it to the coast of France as fellow refugees, though for completely different reasons.

The other main narrative thread involves Kavell and his younger brother Sebastian. There’s something very different about Sebastian as he grows into young adulthood. He doesn’t have the pronounced features through the snout and forehead like other Dog-Heads, though there are very slight indications of his parentage. He also hasn’t had the Rage yet, which usually starts about the same time as puberty, and something about him indicates that he has unique and powerful abilities. The story is solid from beginning to end, with a few especially well executed twists in the final act of the novel.

Simon Clark has a rare ability to suck the reader so deeply into the story they feel like they are traveling along with the characters, a real part of the story. Clark’s body of work is diverse, but there are recurrent ideas and plot devices throughout it, and possibly the most common is the epic journey. With Rage Master the reader will be thrilled and moved as they travel through the novel with the Dog-Heads, who may not be homo sapiens, but are the most human characters in the novel.

Disclaimer: A review copy was provided by one of our sponsors.