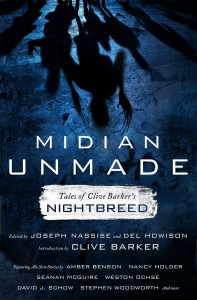 More than twenty authors contribute original short stories to the volume that expands upon Barker’s own work. Their stories run the gamut from fantastic to forgettable in a book that succeeds more often than not. While adding new characters and situations to the Nightbreed mythos, the collection still manages to revisit some of the most interesting characters and locals from the classic book and movie.

Joseph Nassise and Del Howison serve as editors and have collected a wide range of very different stories. Nassise starts things with his preface about his personal experience with Cabal and his obvious love for the story. One of the only disappointments from Midian Unmade is the introduction by Clive Barker, which is reprinted from 1989’s The Nightbreed Chronicles. The actual introduction is fine, but it feels dated and serves only to put Barker’s words into the book.

“The Moon Inside,” by Seanan McGuire, is a solid start to the fiction. It tells the story of Babette, a teenage member of the Breed, who has visions connecting her to Lori who travels the world with Cabal searching for a new Midian. The tale nicely establishes a world after the fall of Midian, one where the slaughter and destruction of the Nightbreed and their underground home has become the stuff of urban legend, known to the public, but not in all of its secrets. Babette is researching Midian when she comes into contact with a Seattle teen and his friends. The friends are playing at being monsters, and it becomes clear that some of the Breed are playing at being teens.

Kevin J. Wetmore’s “The Night Ray Bradbury Died: A Tale of Lost Midian” is equal parts lovely and absurd. The idea of Drummer, a member of the Nightbreed who does not speak, becoming the drummer for a GWAR-like costumed metal band is just too over the top to work. The story, however, is redeemed by the ending which is as subtle and emotional as the beginning is crazy.

Kurt Fawver contributes the dynamic story “The Kindness of Surrender,” which explores the idea of the Breed having to do things they hate because they are compelled to do it. This story is full of death caused by Asteria, but the author makes the reader feel for Asteria and see the tragedy in her existence. It also explores how the Breed are a minority group and what diversity really means. This story powers through from beginning to the deftly plotted ending and is one of the finest works in the collection.

“Pride” by Amber Benson also turns the idea of monsters on its head, blurring the divide between good and bad. Nancy Holder’s “Another Little Piece of My Heart” revives original Cabal characters Eigerman and Ashbery. “Lakrimay” by Nerine Dorman, “Cell of Curtains” by Timothy Baker and “A Monster Among Monsters” by Stephen Woodworth and Kelly Dunn are also stand-out stories.

The pinnacle of the collection is found in stories written by Weston Ochse and David J. Schow. Ochse’s “The Devil Until the Credits Roll” is about Rook, a member of the Breed who resides in a cave in the Tora Bora Mountains of Afghanistan, and Dobler, a CIA operative who knows all about Midian and the Nightbreed. The story adds the element of the Breed to armed warfare and explores their possible use as weapons. Schow delivers with his “Collector,” the story of a member of the Nightbreed who exists just getting by day to day, collecting recyclables to sell for a bit of cash. The Collector doesn’t even know her own name until she comes in contact with another Collector, Jexelle, who teaches her what being a Collector is really all about.

The collection is not just memorable for its great stories, but also for its lack of any truly poor stories. There are a few stories that are flat and don’t stick with the reader, but the read is smooth all the way through. For those unfamiliar with the mythos, Midian Unmade: Tales of Clive Barker’s Nightbreed isn’t very accessible, and though a few stories may resonate, most of the content will lack context and easily confuse. On the other hand, fans of Clive Barker and the world of Cabal and Nightbreed will find this a terrific read.