Trust No One – Book Review 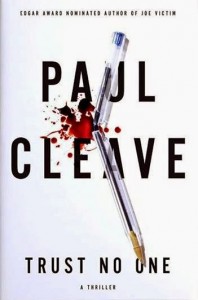 Paul Cleave’s latest thriller Trust No One is a stunning, relentless and intricately plotted novel that never fails to actually thrill from the first word to the last. It’s almost impossible to put down this suspenseful novel as the reader becomes invested in the fate of the protagonist Jerry Grey. The novel delivers twists and turns almost constantly, but never falls into confusion or over complexity. The story goes in directions that no one will see coming, but that make perfect sense as they unravel. The novel is an amazing achievement in plotting, taking a typical who-killed-this-character-and-why? idea, and making it a completely surprising and unique work.

The novel uses the unreliable narrator to tell the story but does so in a way that is as unique as it is brilliant. Jerry Grey is the lead character in the book and the majority of the novel is told from his perspective, the only exceptions being shifts to the third person at the end of each chapter. These diversions into the third person serve to keep the story grounded and in control, because even though there is only one narrator he is telling his story from three perspectives.

Jerry Grey is writing a journal to his future self to help him remember things later on as he has just been diagnosed with quickly progressing Alzheimer’s disease. The novel opens on “Day One,” the first day Jerry has written in the journal after being told about his illness and future mental abilities. He is a remarkably likeable character who is happily married to the woman he has loved for 35 years and has a daughter who is engaged to a good guy. The reader will want to cheer for Jerry and his battle against his own confused mind.

This point of view is generally average and reliable as the book begins, but as “Day One” progresses to “Day Fifty,” Jerry has lost a great deal of cognitive function. This perspective is the truth as Jerry sees it, a truth that becomes more and more confused as the novel moves along. Days where his story is believable, the storyteller can be thought of Lucid Jerry. Lucid Jerry tells the story from diagnosis to the event that lands him in a controlled nursing home.

Jerry Grey is writing a journal as he lives out his days in a nursing home struggling to hang on to any semblance of normal mental function. This narrator can be thought of as Captain A, a phrase that Jerry has come up with to describe Alzheimer’s. Captain A is still Jerry, but Jerry living and writing with such a diminished capacity it’s impossible to know what, if anything, he writes is real. Or how real it is. Truth blends with fantasy with lies as Captain A fight paranoia and false memories that confuse his every thought and action.

The third point of view from Jerry comes in the guise of Henry Cutter, crime novelist and pseudonym for Jerry Grey. His contributions are few and far between but they make up what is probably the most reliable narration of the story. Jerry’s novels as Cutter are what drives the majority of the story, as Jerry, in his faltering cognitive condition, keeps confessing to crimes that he insists he has committed. The confusing point comes when the killings reflect murders portrayed in his books. Did he commit the murders as research? Could someone else be committing the murders as a tribute? Or to frame Jerry. The story charges ahead to the finale as supporting characters are revealed for their true intentions and Jerry gets closer and closer to the reality of his past and the murders.

There are two flaws in the novel that only stand out because the rest of the story is so tight and well written. The first is that the event, at his daughter’s wedding, that pushes Jerry into the main conflict of the stor, just doesn’t seem to be a horrible and catastrophic as it’s portrayed in the book. No doubt, this will not be a problem for all readers, especially those with wedding nightmares in their experience. The biggest problem with the book is the ending, the climax which comprises few pages and has revelations that are reasonable and satisfying, but could have been handled with more subtlety, as the rest of the plot was. It’s a good ending to a wonderful book that traded the precision of the scalpel for a broadsword of an ending.

Trust No One is an absolutely wonderful example of plotting in exacting and intricate detail, while still being readable and never confusing. The flaws are few and minor in what is ultimately a great thriller with a power that will transcend the genre and find readers from all demographics.