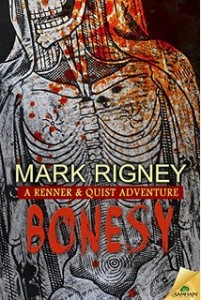 The fifth entry in the Renner and Quist Adventure series, Bonesy, from author Mark Rigney is an occasionally entertaining but thoroughly uneven read. The book begins well, establishing the central mystery of the story, which concerns a framed brass rubbing of a nearly 500 year old skeleton that may have some supernatural properties. Unfortunately, after the first third of the novel, the story becomes unfocused and wordy, spending precious little time on the interesting premise.

The first act of the novel quickly establishes Bonesy as the antagonist of the tale, and an interesting one. She’s a brass rubbing come to life for some nefarious purpose, which will be established late in the novel. Her first scene is smashing out of the glass frame in which she has been displayed and attacking Renner, one of the heroes and narrators, so it’s clear she is up to no good. It takes too long for the purpose behind Bonesy’s actions to come to light and it’s only after cross-country flights and road trips that serve no narrative purpose that the reader learns anything. There are extended scenes in which the characters only ruminate on what it is they already know as they move on to the next plot point.

An interesting, and for the most part successful, element of the book is it’s shifting first person narration. The point of view alternates between the two protagonists of the book, Renner and Quist. The chapters alternate between the two men telling their part of the story which is an unusual application of a relatively uncommon plot structure, that of multiple first person perspectives. This is especially effective when the narrator is in the same scene as his partner and the reader is given the insight as to how the men see each other.

Renner is decent character, if often just plain, but his narration is educated and incisive. His backstory is his most fascinating feature and the book would have been well served to explore it deeper. Anytime a New York Dolls-loving punk reforms into a minister, there’s a story to tell. Dale Quist is a retired private investigator and current rental-cabin owner and operator. He is a drinker, a womanizer and, if his narrative skills are any guide, a relatively uneducated man. The two men’s relationship, how it can be so close at times and so distant at others, is a flaw in the book’s construction that’s tough to get past. It’s basically explained that they have a kinship because they both possess what they call “the feeling,” which is a non-specific understanding of the supernatural.

The novel has a fascinating chapter in the final third of the book that would have worked great as a novella, but as a chapter in the book it was completely unnecessary. Renner finds himself inhabiting the body of another person who lived centuries before, and he finds that he can think, act and feel as both people at once. A great concept that was lost in the wordiness of this book.

There are positives to Bonesy, but they are too few and too brief. A haunted toaster that communicates by burning letters onto individual bread slices, much of Quist’s offhanded dialogue and a supernatural language expert who insists that she is Carol Lombard are a few citations of the fun places this novel should have gone more often.