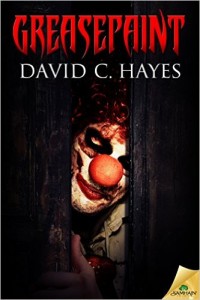 In his first work with Samhain Horror, genre veteran David C. Hayes delivers a solid novella with Greasepaint. It’s a serial killing clown story with a workable premise and some likeable characters. The novella begins with the taping of a children’s television program, “The Orzo the Clown Show,” which comes off as authentic and entirely believable as a real program. It’s from this foundation in pleasant reality that the horror explodes in a gruesome tale of killer clowns, punk rock and demons from the past.

The novella opens with a very strong first chapter that establishes Orzo the Clown as a popular television personality. The narrative follows Orzo from his on-camera persona, to the slightly disgruntled clown backstage and finally to the basement of his home where he is revealed to be a true monster. The action in this sequence, and in the remainder of the book, is very well rendered and doesn’t slow the plot for the sake of gore and action. Be assured, though, that there is plenty of gore and action.

After the revelation that Orzo is a depraved killer the tale jumps forward from 1995 to the present, where the story follows Michael, Orzo’s last victim saved from death at the last minute by a SWAT team decades ago. Michael has changed his name and is living as an aspiring horror-punk rock musician whose girlfriend doesn’t even know about his haunted past. Michael may be brooding and depressed, but he is getting by at life and seemingly succeeding in his profession. When someone releases the anniversary collection of “The Orzo the Clown Show” on DVD Michael is outed as Orzo’s only survivor and chaos and violence take over his life.

The most surprising and enjoyable thing about Greasepaint is the precision of its prose and fluidity of the story. Hayes has taken a relatively common theme and turned it into a new and interesting tale by focusing on the words as much, if not more so, than the story itself. And the story is fun, exactly what horror readers are looking for. The story turns smoothly from the innocence and joy of “The Wallace and Ladmo Show” (as the story is set in Phoenix, I think the local show certainly served as inspiration) to the brutality of splatter-punk. And the story charges toward the climax the reader is treated to an Epilogue that is flat-out breathless and leaves the reader wanting more.