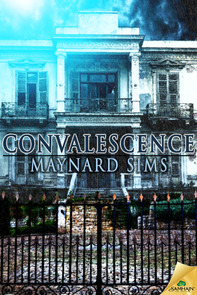 The latest release from Maynard Sims, the pseudonym for long time writing partners Mick Sims and Len Maynard, is Samhain Horror’s Convalescence, a classic ghost story novella. The foundation of the story is traditional but entertaining, and the slow build to the revelation at the story’s end is engineered with great finesse. Sims and Maynard chose to focus on character development and atmosphere instead of cheap thrills and exploitation and the result is a classic ghost story that almost demands to read in one sitting.

The characters are the backbone of the story and that begins with the narrator, Jimmy. He’s a 14 year old who has, over the past few months of 1965, lost his entire immediate family to an outbreak of tuberculosis, a disease he barely managed to survive a bout of himself. He’s sent to his only living relative, an uncle he’s never met named Thomas. In grand ghost story tradition, Jimmy is sent to a mysterious mansion in the countryside in care of an uncle more mysterious than his home.

As Jimmy is convalescing he comes to know the cast of supporting characters who populate the mansion. The harsh and unforgiving housekeeper Mrs. Rodgers sees to Jimmy’s immediate needs and seems to act as a sort of gatekeeper for Uncle Thomas, a man who seems nearly inaccessible. Young maid Amy is close to Jimmy’s age and seems to genuinely care his well being, but Mrs. Rodgers warns Jimmy away from Amy. She thinks that Amy will fill Jimmy’s head with all sort of fantastic tales, tales that slowly unfold for Jimmy though not at Amy’s prompting. Eerie sounds, a girl crying and a seemingly self-starting gramophone prompt Jimmy to ask Amy about the history of the family and the house.

Amy fills in the history of the mansion and its connection to the orphanage she grew up in and how it all relates to Uncle Tom. The mystery is rounded out through Hughie, Mrs. Rodgers’s son who fled the house when he turned 16, and Michael, an orphan whose ghost is trying desperately to connect with Jimmy. What unfolds is a traditional ghost story told through fresh and innocent eyes by two writers at the top of their game.