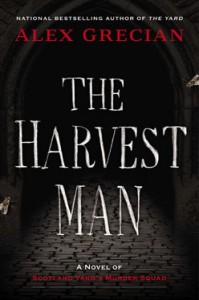 The Harvest Man, the fourth book in author Alex Grecian’s continuing series of Scotland Yard’s Murder Squad, is a fresh and, at times, brutal novel that further explores the characters and mythology of late-1800s London. This is the most accomplished novel in the series to date, expertly blending a fresh and self-contained plot while expanding on the characters and situations created in the earlier books. This review contains SPOILERS concerning the first three books in the series.

The third book in the series, The Devil’s Workshop, ended with many plot threads up in the air. The Harvest Man was free from prison, Jack the Ripper was once again on the prowl, Nevil Hammersmith was fired from the Murder Squad and Walter Day and his wife Claire were new parents. The story of Walter and Claire and their twin girls continues, though not very far as the novel only covers the three weeks after The Devil’s Workshop. It’s an eventful three weeks that see their family in a period of upheaval and transition. Hammersmith makes significant progress in dealing with his lack of employment and his evolution is particularly interesting.

The Harvest Man is not short on horror, chronicling the adventures of three different serial killers. The story of the Harvest Man and the unnamed killer is contained entirely within the novel and is ultimately wrapped up in a tidy fashion. Things are different, however, when it comes to the exploits of Saucy Jack. Grecian presents a complicated and emotionally confusing portrait of Jack, bouncing between serial killer and merciless torturer and charming, and even occasionally heroic, rogue. It is something the author pulls off with no small amount of finesse as it is captivating and believable.

The novel isn’t perfect. The characters of Henry and Fiona, loveable and well-developed in previous novels, stall out here and cover no new ground. Henry, in particular, seems used in an unnecessary and unsatisfying manner. The elements of modern forensic science also become a bit over the top, coming at the reader as though the characters are making these great scientific leaps in a matter of relative days. It’s a small but nagging fact that stands out in an otherwise solid story.

The exploits of Scotland Yard’s murder Squad have become a highlight in the annual reading calendar. Alex Grecian manages to tell an intelligent and entertaining self-contained story and to add to the characters and situations he’s spent now four novels developing. The Harvest Man ends with a show-stopping cliffhanger that ensures the reader will be back for the next volume in the series.