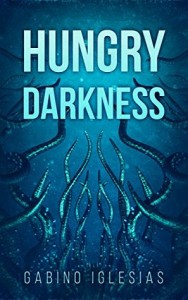 Gabino Iglesias ventures into book-length horror for the first time with his Severed Press novella, Hungry Darkness. It’s an entertaining tale of horror on and below the ocean waves just off the coast of Belize. Various unlikely heroes battle to keep a giant sea creature from continuing its already extensive killing spree which that has claimed many unlikely victims. Though the narrative wanders a bit and focuses on insignificant characters at times, it’s still a very solid one-sitting read that keeps the action and interest moving along to the ultimate climax.

Hungry Darkness features two main characters who are both realistic and well rendered. They follow atypical arcs throughout the book and the structure works well.

Nick Ayres is a cave diver and modern day adventurer who secures a National Geographic grant to explore and film a dive on Giant Cave, the world’s largest submarine cave. Little does he know that his hubris and lack of respect for the laws of Belize and the environment will cause unexpected problems with his dive.

Gabe Robles is a local tour guide who knows the waters well around Giant Cave, and that knowledge is put to use by the local government. After numerous sightings and deaths it is decided that if the monster in the waters comes to the attention of the public it will devastate the tourism industry. Gabe is brought in as an unlikely hero to find and kill the beast. Using shady connections to the drug trade and legitimate connections to a well respected marine biologist, Gabe decides on a plan to stop the monster. In an interesting and refreshing twist his plan is simple and realistic, something a rational, normal person would come up with. Despite the lack of over-the-top sensationalism it makes for an explosive and entertaining final showdown.

The story does drift, on a few occasions, to the activities of characters who have nothing to do with the greater plot. It blurs the focus a bit, but these scenes are still fun and are a trademark of this kind of horror story. In the same tradition as Jaws and other “don’t-let-the-monster-ruin- tourism” stories, Hungry Darkness manages to retain unique elements and take fresh approaches to the traditional story model. The novella will leave you hoping that Gabino Iglesias decides to dip his writerly toes into the horror waters again soon.