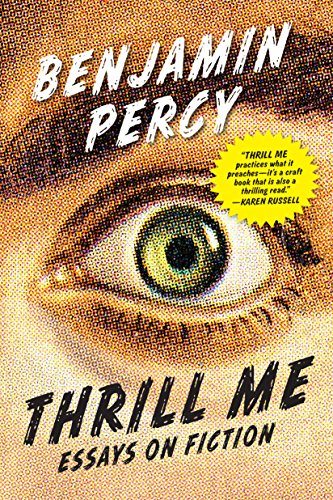 I’ve written about several books on the craft of fiction, and I’ve read hundreds of them, so I wouldn’t call myself a complete luddite when it comes to the subject. It’s one I know a bit about and I’m normally comfortable talking or writing about it. But there are authors who come along every now and then who are so uncanny good at the art themselves that I find myself feeling a bit out of my league, treading in water too deep for someone so small as I. John Gardner’s The Art of Fiction comes to mind, as does, to state the obvious, Stephen King’s seminal work on the subject, On Writing. Those are both books that I feel strongly should belong in every serious fiction author’s possession, whether accomplished or aspiring. And another one I discovered just this year that I feel just as passionate about is horror author Benjamin Percy’s collection of essays on the craft, Thrill Me.

Thrill Me, isn’t so much instructional in nature as it is expository. Each essay serves as an observation on specific aspects of the art of storytelling, whether it’s in film, fiction, or even music, providing you with uncanny insights and useful tools for tackling obstacles that all authors face at one point or another. In the titular piece, he talks about just exactly what the title suggests, thrilling your readers, pulling them forward and compelling them to follow through to the end:

“Books were portals meant for escapism. Suck me into the tornado, beam me through an intergalactic transporter, drag me down the rabbit hole, and then, please, quicken my pulse for the next three hundred to seven hundred pages.”

Using examples from a rural Oregon childhood, as he talks about coming in to Portland to visit Powell’s, he demonstrates, consciously or subconsciously, through his own stellar writing exactly the thrill that the article alludes to:

“For those who have never visited it, the downtown Powell’s takes up a whole city block. A giant concrete sarcophagus of books. There is a ghost that haunts the water fountain. An urn of cremated remains that moves from room to room. The shelves spill books, used and new, and the aisles buzz with the kind of diversity you’ll only find at the DMV: dudes in suits and dudes in mud-caked cowboy boots, a woman with dreads and a woman with a tiara and a woman with bright blue hair. A carnival of wonders for a kid from the boonies.”

The whole book is this way, as entertaining and enticing as any Stephen King or Peter Straub story, or Benjamin Percy story, for that matter. The essays cover a variety of subjects, the writing laid out in an almost allegorical way as Percy weaves his way through different aspects of the craft of writing, giving detailed examples from fiction and other media to demonstrate the art of setting, action scenes, writing violence, and more.

When you begin reading Thrill Me it doesn’t take long to begin to recognize Percy’s brilliance. There are a lot of things that make me say this, but the most prominent—and important—one is his ability to take on subject matter that could easily slip into the realm of mundane, been-there-done-that, and transform it into a work of high creativity in and of itself. A lot of better authors than myself called it one of the best books of the year. I took them at their word and, now that I’ve read it, I wholeheartedly agree with them. Percy’s engaging style and turn of phrase not only educates, but ceaselessly entertains, his love and mastery of language evident at every turn in passages like this, from “There Will Be Blood,” his essay on writing violent scenes:

“The villains of their stories look like people you might pass in the cereal aisle at the grocery store. Evil is banal. And the point is emphasized through the use of the obscene: when the violence occurs offstage, the reader creates it and becomes a perpetrator.”

And again, in this one from “Staging the Iconic Scene,” his essay on set pieces and the ability to set a hook, to generate suspense through setting. Here he uses a lot of film references—as he does throughout the book—to present his ideas as they apply to speculative art of all types, but particularly writing. The references take what starts out as an abstract and give it visual clarity, making it almost impossible not to get the points he’s trying to make with each article:

“Set pieces are the moments I was referring to before, when the stakes are escalated, the staging carefully managed, the special effects sometimes expensive and flashy. Alfred Hitchcock refers to them as crescendos, a much better term, which implies a heightening, a swelling, a loudness that demands the audience lean forward.”

Percy is a master wordsmith and he delivers his messages with the panache and style of the grizzled veteran he is, both as teacher and author, engaging you so intensely that you don’t even realize you’re learning something, having become so involved in the telling.

One of the things that really stands out about Percy’s essays is that he never sounds preachy, or even like a teacher, and yet, you’re learning the whole time. You become so engrossed in his voice, his frequent allegories and snippets of personal experiences draw you in and enchant you, but you come out the other end of each piece with a little more knowledge than you had going in. And the truth is, it doesn’t matter what kind of reader you are. Casual student, experienced author, or just a lover of all-around great writing by a master of the genre, all will take something both positive and fulfilling from this amazing book by the great Benjamin Percy.

With essays ranging across a wide array of storytelling techniques, Percy clarifies plot methods, setting, revision, dedication, and many other subjects with the alacrity of not just a master wordsmith, but a master instructor, giving you a vast, immensely useful box full of tools to employ in your craft and become a better writer, finally wrapping it all up with “Go the Distance,” an admonishment and encouragement to constantly work at your trade, harder even than others of your peers as you chase your dream and build your career. He reminds you that dreams don’t just come true, they’re made to do so through the expenditure of a whole lot of blood, sweat and tears. There are going to be low points and there are going to be rejections, a whole lot of rejections, but you must push on if you want to succeed. As he finishes up that final essay, he leaves you with the following and, as appropriate of a closer as it is, I’m going to leave you with it too:

“And then pop the Rocky sound track into your stereo, tape your knuckles and wrists, ram your hands into gloves, and step into that ring ready to last twelve rounds against Apollo Creed. Go the distance.”