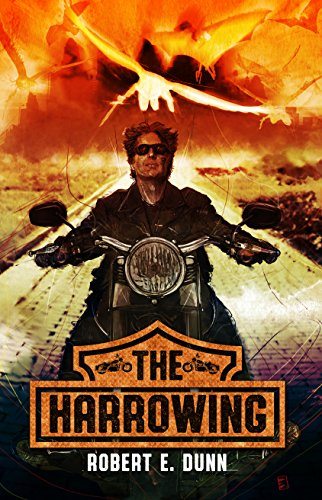 There are many tropes and themes that horror authors tend to reuse over and over again to raise the small hairs on your body, give you some goose-flesh and a shudder or two. There are the usual vampires, werewolves, and zombies—my God, so many zombies—and some authors have latched onto them and made of them something original and captivating. And then there’s the Devil. And demons. And Hell itself. They’ve been done to Hell and back too, and I have read a ton of them recently, many of them remarkably well handled and unique in their own right, but a lot that weren’t so great as well. So if you approached me and asked me to read yet another book that dealt with Heaven and Hell as its subject matter, I’d probably tell you I’m too busy just now. Unless your name is Robert E. Dunn. In that case, how soon can you get it to me? His newest novel, The Harrowing, is just such an offering, dealing with the above and below. But he doesn’t just tell us about those places, or give us a story that deals with the denizens of Hell encroaching on our earthly plane. No. What Robert does is take us on an epic thrill ride straight to Hell itself.

Never trust an angel. In The Harrowing, those words become the catch phrase for Andrew Jackson Presley, later known simply as Demon Jack, after the angel Puriel convinces him to take up the task of rescuing a girl who’s trapped in Hell. But as it turns out, angels are more duplicitous than even demons can be, possibly even more so than the most beautiful woman in all of Hades, Satan herself, and nothing Jack has been told is truth and nothing in Hell is ever what it seems to be. Especially if angels are involved, which is almost always. Because Heaven and Hell are at war with one another and Jack is a pawn intended to help them meet their ultimate, likely heinous goals. But Jack doesn’t play by any but his own rules and, on his trusty—and magical—motorcycle Legion, he makes his own plans and angels and demons alike soon discover that they’ve brought a force of nature down on themselves and there will soon be pandemonium as they set him loose on the denizens of the Abyss.

There are few things that are always true about Robert E. Dunn’s stories. For one thing, his premises are always outlandish but, oddly, don’t deter his readers from suspending their disbelief. For another, his characters are always quirky, lovable—or detestable—broken individuals that you find yourself cheering on and hoping things turn out well for them. And he always seems to be having just a little bit of tongue in cheek fun with both his story and his readers. All of those things can be said about The Harrowing as well.

But the thing that is so impressive about this book—in addition to those previously listed—is the incredible world building. Robert Dunn takes us straight to Hell. And it isn’t just his scenery. While the settings are truly masterful works in and of themselves, it’s the other aspects of the place that really transport us. You can smell the sulfur, you can see the bodies bobbing like floats in the water, you can taste Demon Jack’s cigars and beers and hear the rumbling sounds of Legion as he rips through Hades on a mission that only he is aware of. As he stands on those high walls of the city of Dis or experiences the horrendous stench of putrefaction wafting from the fringes of the Ghost City, his reader stands there with him. And all the while, Dunn buffets you with kaleidoscopic, chaotic imagery. The closest analogy would be if a Hieronymus Bosch painting were made into literature, this book is what it might look like.

Robert Dunn has been a go-to author for me for a few years now and I’ve enjoyed every single horror novel and novella he’s written, but none so much as The Harrowing. His work is always original, always hugely entertaining, and strangely, always somehow thought provoking. And as a reader, though you’re reading about Hell, you’ll feel as if you’ve been to Heaven and the stay was way too short. As horror fans, Dunn is an author I think we should all be keeping an eye on. He’s done some really great stuff so far and, I suspect, the word phenomenal will fit the description of a lot of his material going forward. He’s improved as an author with every single outing and that has been, in my experience, a sure sign of an author who’s bound for high places. If you haven’t read his work yet, go get a copy of The Harrowing. You won’t be disappointed.