Liars, Fakers, and the Dead Who Eat Them – Book Review 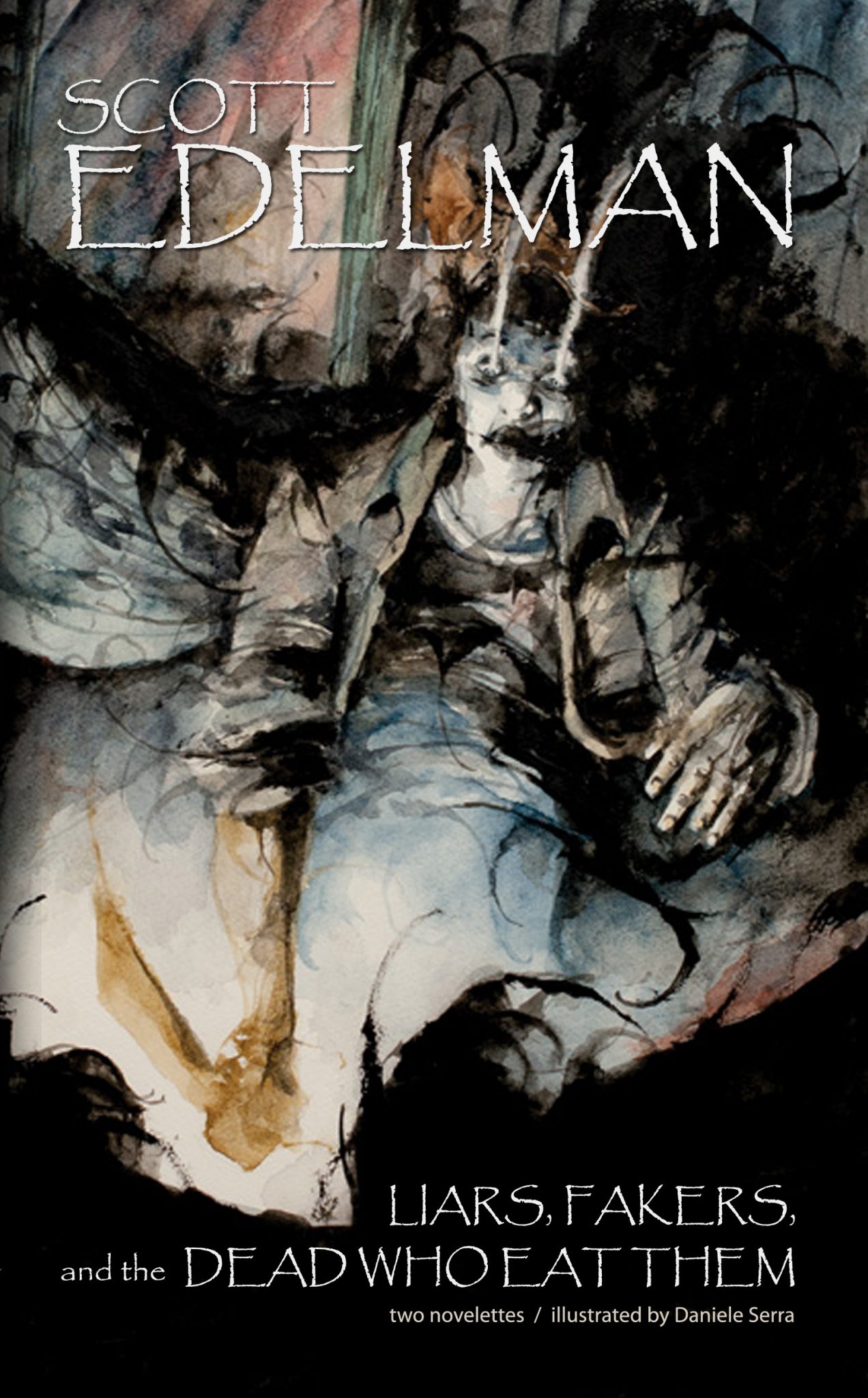 I have a guilty confession to make to all you zombie lovers out there. I love great zombie stories, but I’ve been super disappointed with the trope lately and I’m burnt on the run, hide, kill zombies, search for food, fight other bad people, rinse, repeat. It’s been done too many times and every time someone approaches me with such a book, my brain goes kind of numb and my eyes glaze over. But when Michael Bailey offered me a copy of Scott Edelman’s Liars, Fakers, and the Dead Who Eat Them, that was all she wrote. I was compelled to accept as soon as he said the name “Edelman.” I cut my literary teeth on the works of Edelman and other authors like him. It was them that lured me in and got me interested, first in good storytelling in the form of the comics they wrote for, and second, in stories of a darker nature. And imagine my surprise when, despite my resistance to tales of the undead, this book turned out to be one of the best zombie books I’ve read in the last decade or two.

Maybe the reason Liars, Fakers, and the Dead Who Eat Them resonates so deeply with me is the fact that in a way it hits close to home. We live in a really messed up world right now, especially us Americans, and Todd’s novellas kind of reflect the current human experience. They give us a way to tune out the white noise, turn off the news and turn away from social media, just losing ourselves in someone else’s problems, if only for a short while.

When it comes to dark speculative fiction today, the word “zombie” comes up more often than any other term, and the creature itself has become more prevalent than any other monster, overtaking vampires, werewolves, and every other beast in the cornucopia of horror fiction. It’s become the layman’s idea of what the genre is all about, and it’s been done over and over, each new attempt trying to add its own unique spin to the trope but mostly just repeating the same story with different words. You could read Brian Keene’s The Rising and get much the same story as you’ll find in most of the work being produced today.  So, then, if that’s the case, what does it take to make a so-so zombie novel great? It takes humanity. It has to be a story about people, with the zombies being just incidental props in a narrative driven by human emotion and interaction. And those tales, though few and far between, do exist. They permeate Keene’s lexicon of the undead, as they do the works of Alden Bell, and Rob Hart’s novella, The Last Safe Place is another great example. And you can also find two of them in Scott Edelman’s Liars, Fakers, and the Dead Who Eat Them.

In the first story, “Only Humans Can Lie,” we’re introduced to the new apocalyptic society through the eyes of Tim, a vegan chef who believes that eating meat is akin to murder. Tim’s conflict comes in the form of a hometown that subsists mostly on beef. He, quite absurdly, has set up a Vegan restaurant directly across from the towns local steakhouse and his world is turned upside down by the apocalypse as the town’s residents become ever more resistant to Tim’s values and ideals. This is where we first begin to see the human element rearing its sometimes-ugly head and where it becomes evident that Scott Edelman has created something that transcends the usual fare the trope has to offer. It’s a brilliant story made even more so by the unexpected and twisted events that come to pass in its culmination.

Surprisingly, as stellar as that first entry is, the shining gem in the book is the achingly poignant “Faking It Until Forever Comes.” It’s the story of Shelley, a small-town waitress who, in the wake of the apocalypse, is given the opportunity to become an actress. It’s a dream come true for her, so she’s able to overlook the fact that her co-star isn’t exactly alive. It’s another somewhat absurd piece, but really, life itself is often absurd and the semi bizarre premise of these stories merely reflect and magnify that fact, putting the reality of being human on full display in this technicolor rendering of a young woman’s struggle between her desire for stardom and a yearning to make things right. It’s a tale of self-discovery, the strength of the human spirit in a horrific time, and ultimately, of hope. Edelman is an astute student of the human condition and, as such, is an unchallenged master of character development. Both stories are perfectly paced, well thought out, and satisfying, but in the end, what drives all those things are the people, their dialogues and interactions taking center stage almost one hundred percent of the time, reeling the reader in as surely as an angler with a fish, finally releasing them, breathless and filled with a strange sense of wonder and catharsis as the stories conclude.

These stories are not the in your face violence and action type of tales that dominate the zombie scene these days, and if you’re looking for that, you’ve come to the wrong place. But if you’re looking for just straight up, damn good storytelling filled with horror and delight in equal measures, this is what you came for. Replete with stunning illustrations by the inimitable Daniele Serra, an introduction by the undisputed master, Brian Keene, and fiction that will hang with you and make you think long after the book is over, you’re doing yourself a disservice if you don’t add Liars, Fakers, and the Dead Who Eat Them to your summer reading list.