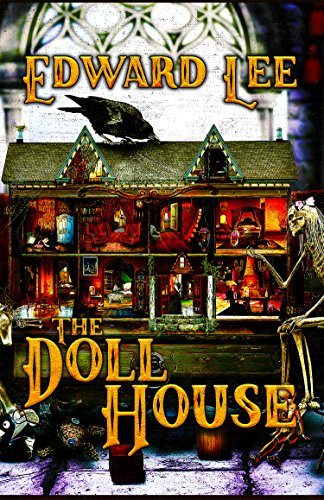 When I first saw that Edward Lee’s novella, The Doll House, was a thing, I immediately contacted the folks over at Necro and asked for a copy. And that’s not to say that I’m a hardcore Lee fan. I’ve read a couple of his books before and they were well-written and entertaining, but I have to be in a rare and particular mood to want to read the ultra-extreme style of horror that authors like Wrath James White and Edward Lee produce. So, it wasn’t just fandom of Lee that sent me actively searching for this book, it was my huge author crush on M.R. James, the author who wrote the brilliant story, The Haunted Doll House, and for whom Edward Lee’s newest book is a tribute to.

In the preface to The Doll House, Lee informs us that he’s a super fan of M.R. James, even having gone so far as to read “The Ash Tree” twelve nights in a row once. He also says—in a nutshell—that he tried to simulate or “caricaturize” James’ voice and his characters. So, the first question I’m going to address is whether he succeeded in his—somewhat lofty—goal or if he missed the mark. If you consider the following quote from James’ story:

“… I will only say that the base or plinth on which the house stood (for it was fitted with one of some depth which allowed of a flight of steps to the front door and a terrace, partly balustraded) contained a shallow drawer or drawers in which were neatly stored sets of embroidered curtains, changes of raiment for the inmates, and, in short, all the materials for an infinite series of variations and refittings of the most absorbing and delightful kind.”

Now place that alongside the following from Lee’s story:

“As far as I can ascertain, the provenance of the matter came in the summer of 19—, truly, a jewel of a summer, distinguished by over-bright flowers, azure skies, and wind-swept fields whose grass could only be described as deliriously green.”

So, did he hit the target? I think he came damn close, which, when it comes to James’ is very impressive. If you had to pick the hardest of the classic writers to emulate, James would be way up near the top of the list. But Lee has managed to capture the tone and the phrasing quite nicely, his authorial voice always similar, and sometimes identical, to that of M.R. James and, though not illustrated here, he’s managed to simulate James’ flowing dialogue almost flawlessly. It’s that, more than anything else, that moves the story along at a steady, pulse-rushing pace.

None of that, when it comes to the story itself, is to say that Lee conformed to the technique and style of the James work. His book has that Edward Lee flair to it. You know, the one where there’s brutality aplenty and lots and lots of explicitly detailed sex. He’s a hardcore, extreme horror writer and, even though he does a great job with the voice, plenty of his own explicit, splatterpunk violence, and sex bleed through to make this the kind of horrific romp that only flows from Edward Lee’s pen.

Now, the one thing that really brings this thing together, takes it from being just a good story to being, instead, a great fun read, is the ending. The last five pages will blow your brain through the top of your head. The ending is so masterfully executed, so unexpected and viscerally terrifying that I sat there in awe for a while and then went back and read it twice more to try and experience and absorb the shock and surprise a few more times. It’s safe to say that, even if you only read the last ten pages, it’s well worth the price of admission. If you’re looking for a lightning-quick summer read, and if you’re not put off by gratuitous, explicit sex scenes, I would enthusiastically recommend The Doll House.