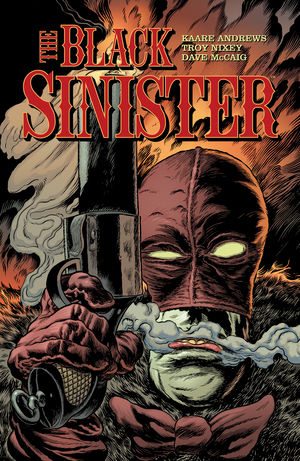 In the intro to his sketchbook at the back of The Black Sinister, artist Troy Nixey said he wanted to create a character that was like Batman if Batman were an a**hole. He succeeded marvelously. Emerson Black is an amoral billionaire sociopath who has taken it on himself to be Coal City’s protector, imposing his will and his amorality on anyone he decides is doing wrong, which generally means, anyone who threatens him or his bottom line. He has no concern for collateral damage, wreaking wanton havoc across the city in his quest to bring “justice” to the city’s crooked leaders and the mobsters they’ve hired to take him down. He’s got huge mommy issues and a trigger happy “Alfred” who thinks bullets and bombs are the solution to everything.

The thing about The Black Sinister is, to be perfectly honest, it has the potential to be something of a letdown. The story is humorous, and engaging enough to keep you barely hanging on but the dialogue feels stiff and unnatural through much of the book, so if it weren’t for one major aspect of the comic, I very likely would have put it down as a “Did Not Finish.” But the fact of the matter is, Troy Nixey’s amazing artwork pulls this thing off admirably, taking it from mediocre and turning it into something that’s pretty fantastic. The inking and colors are perfect for the chaotic pacing and the black mood that permeates the whole thing, giving life to the quirky, eccentric characters, and rendering the politicians and criminals in caricature-ish fashion, giving them a look that pairs perfectly with Andrews script portrayal.

The book is a lightning fast read, with cover to cover action and in-your-face atrocities and violence, not to mention the brutal pacing of the thing. In The Black Sinister, mayhem is the order of the day and chaos and destruction, spiced up with Kaare Andrews’ humorous script, are the only items on the menu. Artist Nixey dishes up a sensual, visual smorgasbord of line and color that serve to drive the story at frenetic speeds, keeping you fully immersed in this vivid fever-dream of a comic that took me by surprise and left me wanting more.
I’m just now getting back to the comic thing so I’m not super familiar with the creatives currently working in the industry, but the Andrews/Nixey team up is one I’ll keep my eye out for when looking for new material to consume, particularly the Nixey side of the equation. His artwork stands out as a major highlight of the work I’ve read recently and sets a bar in my mind that will be hard to live up to. In comics, artwork always makes the book and, with that philosophy in mind, Dark Horse Publishing has produced a new comic that will likely garner many fans and followers, myself included. Highly recommended.