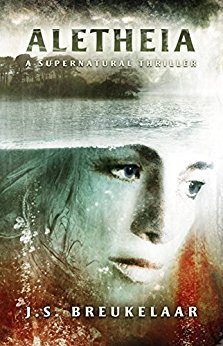 There’s so much greatness to talk about in author J.S. Breukelaar’s newest book that it would take up way more space than is appropriate for a piece like this if I tried to cover it all. Aletheia is many things at once and it’s difficult to define it in traditional, rote terms. It’s a ghost story, certainly, and a heartbreaking love story. But it’s also a very noir-esque mystery with some of the most broken and beautiful characters I’ve encountered in years. And, in all those instances, it’s different than what anybody’s done before.

In Aletheia we meet a severely, wonderfully messed up cast of characters, so well developed you sometimes feel as if you’re listening to a friend or relative recounting details of their lives to you. Breukelaar has done such a masterful job with all aspects of this haunting novel, but none so much as the creation of her actors. Through backstory and the use of brilliant interactions and dialogue, we’re introduced to Thettie Harpur and her criminal clan of drug manufacturers and dealers, including the twisted and deadly Doc Murphy, Thettie’s two sons, and the enigmatic young girl, Bryce, who has lured them home to Little Ridge to find Frankie Harpur, the cousin who took the fall when their drug operation got busted. We also meet Lee, a tragic figure who has been through horrific calamity and is bound to Little Ridge by a past that won’t let him go and that might make you shed a tear or twenty. And the thing about all these people is that, if you have any kind of a heart at all, you will come to love some of them intensely, and hate some of them just as much or more so. J.S. Breukelaar knows her way around people and you can tell that she’s studied them intensively.

And that leads to another thing you’ll come to know about Breukelaar as you read her work. She’s an extremely meticulous researcher and, because of that, she approaches her subject, which is quite complex, with confidence and alacrity, rendering complicated information in a comprehensive, accessible fashion. Aletheia is first and foremost a ghost story. But at its heart and soul, it’s a study in human and reptilian memory—did I mention Vernon the Gila monster—and the author knows the material so incredibly well the reader is drawn into her subject matter, walking away with new and intriguing knowledge without ever feeling like they’ve been preached at or lectured. In addition to being an amazingly satisfying read, it’s a story that will expand your mind if you let it do so.

Told largely using backstory, Aletheia is drawn with exceptionally human emotion, with suffering, with fear, and ultimately with hope, and as the pieces of this complex puzzle begin to fall into place you’ll realize just how brilliant and important the use of memory is to the telling of the tale. Speaking of which, that’s another of many remarkable attributes to the novel. The telling of the thing. The narrative is outstanding. J.S. Breukelaar’s authorial voice is gorgeous, often poetic, and the imagery she creates is so vivid and sometimes in-your-face that you’ll feel more like you’re watching, or even experiencing the story than reading it in a book. Breukelaar knows how to paint mind pictures and she does so with broad strokes of technicolor, lyrical language that burrow their way under your skin and into your heart and mind. You’ll come away from each chapter with something new to think about and process, and you’ll probably have to take a cry break every now and then too.  There are some moments that are so amazingly sad they could make a grizzled old Irishman tear up a little, so do bring some tissue with you. A lot of it.

So, what do you get for the price of admission to this show? Well, you get a literary mashup of a love story embedded in a mystery-noir, covered in magic realism and wrapped in a horror story so terrifying it’ll hang with you for a long time to come. Think “Breaking Bad meets The Metamorphosis” and you won’t really be that close but you’ll be as close as you can get to the experience you’ll have with Aletheia. There, should be one disclaimer included with this story, though; if you’re looking for a quick, easy read, this isn’t it. Aletheia is a complex tale with a lot of small pieces so you need to take some time and pay attention or you could get lost in the intricacy of it. But if you do take that time and give the mental energy that you should give to this story, you’ll be surprised, amazed, and delighted at the eventual payoff. You’ll find yourself in the third act of the book encountering shocking reveals in rapid-fire succession and, as the puzzle pieces start falling into place, you’ll have so many “Aha” moments you won’t be able to keep count of all of them.

Aletheia is neo-noir nightmare from the brilliant and beautiful mind of J.S. Breukelaar, a story that is almost certainly going to be on many “best of year” lists and one that should definitely be on your reading list. Like, now.