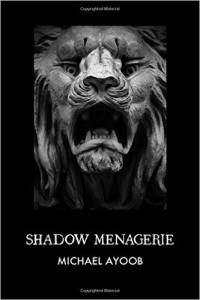 In Michael Ayoob’s novel, Shadow Menagerie, readers are transported to Burdock Downs, a once prosperous industrial town now nothing more than a city left to rot.

When a shady developer shows up with a seemingly foolproof plan to revitalize the Downs (helps that he has a few corrupt officials in his back pocket), only Reggie Gundy, a little girl with special abilities, can see through his wicked intentions and stop him before it’s too late.

Shadow Menagerie finds its strength in its main characters, specifically Reggie and the shady developer, Lonnie Waters. Other characters are brought into play, such as Reggie’s adoptive father, Shelton; the corrupt mayor of the Downs, Colton Hauser; and a few others, but none are as engaging as Reggie. Her youthful innocence mixed with her adventurous spirit make her a well rounded character and easily the most enjoyable out of the whole cast. Most of the storyline follows Reggie on her quest to save her hometown (and solve a few other mysteries along the way), but the more time spent with Reggie, the more enjoyable the novel is.

Lonnie, on the other hand, is the polar opposite of Reggie. He’s an all-around rotten guy who’s hiding more than a few skeletons in his closet. Sometimes you just can’t help but to enjoy a bad character, and Lonnie is no exception (up until a certain point anyway). Of course, all the characters are connected in one way or another, but those threads are slowly revealed as the book progresses.

Ayoob sets up the broken town of Burdock Downs wonderfully. From its main street lined with empty stores to the litter carelessly tossed onto the streets, you get a great sense of setting from his descriptions. It’s easy to find yourself lost in this world even when a few more plot points are picked up and become major elements in the story.

Shadow Menagerie is a story of many faces: on one hand, it’s a revenge story. On the other, it’s a ghost story. Either way, it’s an intriguing novel brought to life by the many personalities within its pages.