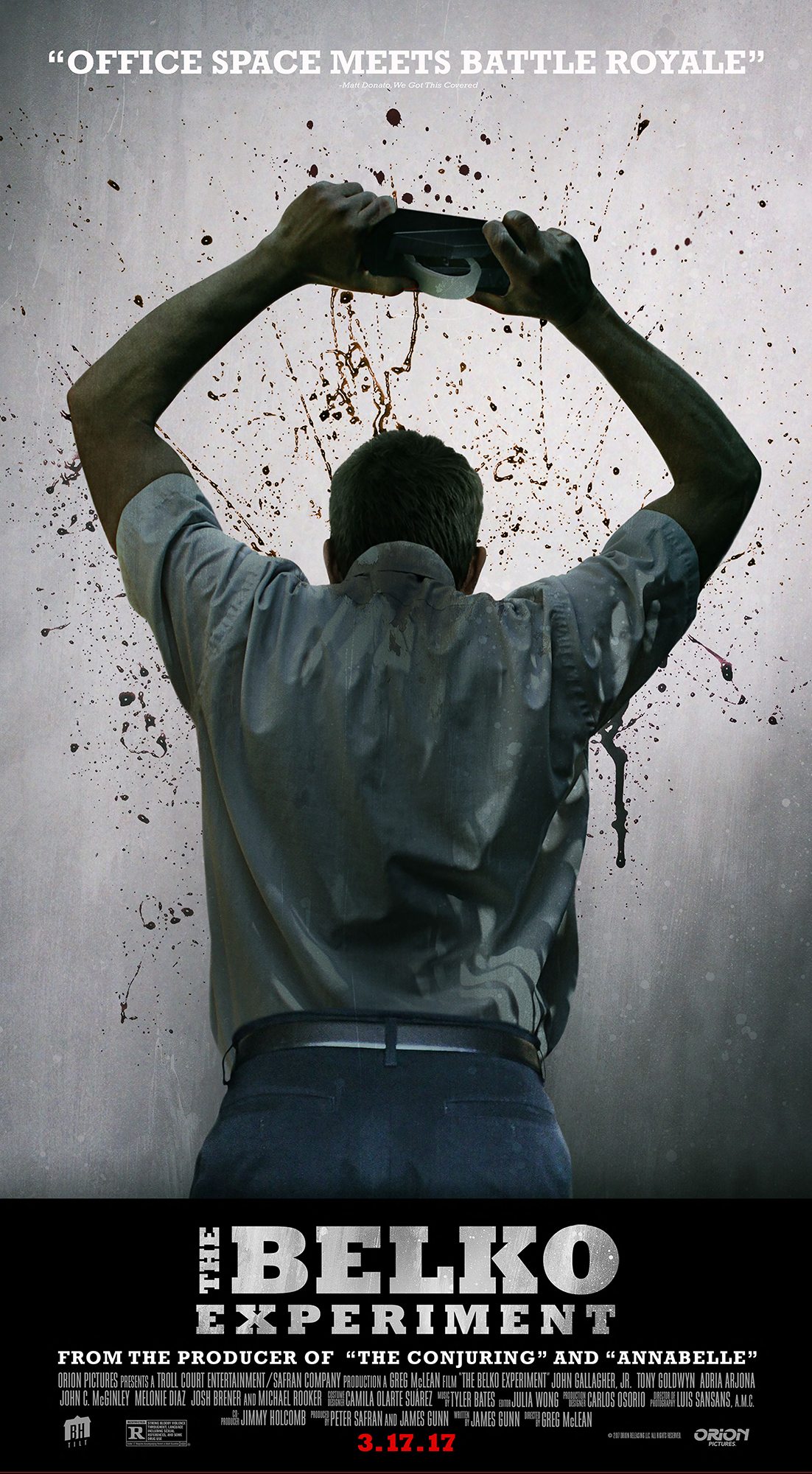 Yes, my friends—hell is real, and it goes by the name of Corporate America.

Situated in Bogotá, Columbia (South America counts in the above statement), Belko Industries is a worldwide corporation that employs a good chunk of English-speaking, well-to-do folks under the ruse that they assist potential job seekers find employment in other countries.

What starts as a somewhat normal day at the office (aside from the handful of new guards with semi-automatic rifles stationed at the building’s check-in point) eventually turns into the ultimate team-building exercise…with deadly consequences. Without warning, an unfamiliar voice comes on the intercom saying that the group of 80 employees must kill two employees within an allotted timeframe, or more than that will die. People react as expected: some think it’s a joke, a few chuckle uneasily. But as the clock winds down, it becomes very apparent that someone’s not playing around (yeah, if the company you work for ever asks to implant a chip in the back of your head for “security purposes,” it’s totally a bomb). As heads explode and metal shutters cover all means of escape, a normal day at work turns into a fight for survival.

As an office drone myself, the idea of an all-out battle royale between coworkers has crossed my mind at some point during my tenure (and though I’d like to think I’d be the last person standing due to the fact that I’ve seen all the movies where situations like this play out, well, let’s face it: I’d probably die first). So when a movie comes out that’s been described as Office Space meets Battle Royale, I say GIMME GIMME!

Now, the similarities to Battle Royale are very pronounced, that much is apparent by reading the description. Where The Belko Experiment differs is that…it’s not a group of high school kids.

Yeah, there’s no going around it: Battle Royale and The Belko Experiment are basically the same movie.

But that’s not necessarily a bad thing. After all, BR is a cult classic, though the idea of taking people and pitting them against one another isn’t something it created. Like a fine wine, the concept gets better and better with each iteration. With Belko, we get a nice blend of comedy mixed in with the horror, and a large cast of characters that we actually care about: there’s Mike (John Gallagher, Jr., a.k.a. HEY THAT GUY! from The Newsroom, 12 Cloverfield Lane, Hush) who you know is going to be our hero and the people’s champion; Leandra (Adria Arjona, True Detective), the no-bullshit voice-of-reason (and Mike’s girlfriend); Chief Operating Officer Barry (Tony Goldwyn, Ghost), a man with a plan; and Wendell (John C. McGinley, forever in my heart as Dr. Cox from Scrubs), the guy you know is going to stir shit up. As numbers dwindle and tensions rise, viewers are treated to what could very well play out in a real-life version of the game: people turn on one another, others hide and fend for themselves, while others step up and take a stand. So if you’re poo-pooing the idea that The Belko Experiment isn’t as good as Battle Royale, the human element makes it worthwhile.

Special features on the Blu-ray from Orion (remember them?) are “Rules of the Game: The Secrets Behind the Belko Experiment,” which runs about 10 minutes and chats with writer/producer James Gunn (Guardians of the Galaxy, Slither), director Greg McLean (Wolf Creek), and a few others. “Lee Hardcastle’s Survival Tips” are four two-minute claymation vignettes that were used (in some capacity) to promote the film (and should you be wondering, Lee Hardcastle is a claymation super-genius. His short film, T is for Toilet, appeared in The ABCs of Death). There are also five minutes worth of deleted scenes (nothing too pertinent was cut), a stills gallery, and the film’s trailer.

Gunn best described the film as “one part comedy, one part drama, one part thriller, one part horror, and one part [character study],” and that’s spot on. Delightfully twisted and sure to entertain, The Belko Experiment is a must-watch.

Special thanks to @FoxHomeEnt for the Blu-ray!