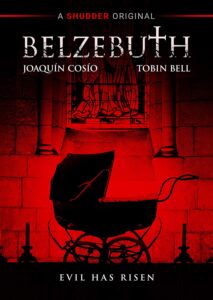 Here’s another movie on the horror streaming service, Shudder, that they decided to put out on disc, and I just love that. But do I love the movie? I mean, look at the cover. Look at it. One look and you immediately know what this movie is going to be about, right? Well, let me just remind you about the old saw of judging a book by the cover. Yes, this movie surprised me, not once but twice, and that is a rare and wonderful thing indeed. In an attempt to give you the same experience, I’m going to be light on the plot details, so bear with me and trust me, it’s worth it. So grab your crucifix, brush up on your Latin, and let’s talk about Belzebuth.

This Mexican import is set on the border, and starts with a Mexican police officer on the happiest day of his life: the birth of his son. Then something happens. Something bad. Real bad. Five years later, and more bad things of a similar nature are happening all over town, with increasing frequency. To help stop the over-the-top murder spree, the US sends a FBI agent that specializes in the paranormal and the occult to aid in the investigation. Now the two cops are involved in a mystery they could never have expected to be so massive and world-altering, looking for an excommunicated priest, played by Tobin Bell (Saw’s Jigsaw) who has his own dangerous game to play. So if you like supernatural thrillers that twist and turn and keep you guessing, but one that earns those swerves and bends honestly and doesn’t just pull stuff out of its butt at the last minute for the sake of a “twist,” then this movie is for you.

That is not to say that everything here is perfect. A few of the scares missed the mark with me, and at almost two hours in length, it did feel like the movie was a tad overlong. But really, those are the only complaints I can come up with for this one. Everyone does a good job here, especially the actors, who often have to emote in both Spanish and English. The special effects were solid, as was the direction by Emilio Portes. And once again, this movie had moments that honestly had me saying out loud, “holy s***”), and I love when a film can elicit that kind of response from me.

On to the extras you can find on this new DVD from RLJE Films. Okay, ready? There, wasn’t that fun? Yes, this DVD is as bare-bones as they come, and while that’s not totally uncommon for a foreign film released in the U.S., don’t tell me there’s not something, anything that they could have put on here. I got to say, in this day and age, that’s very disappointing and inexcusable.

Shameful DVD release aside, the movie is a solidly good film that does new things with a very old and tired subgenre. If you are looking for a different take on some Satanic shenanigans then I can easily recommend getting Belzebuth and give it a shot. I’m betting you’ll be happy that you did.