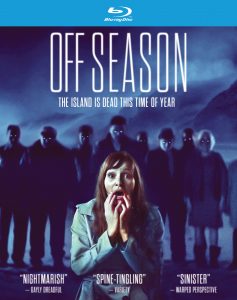 Off Season (or as IMDb calls it: Offseason, but that’s the wrong title) was a movie that took me by surprise. I had never heard of it, knew nothing about it, and I watched it for the first time on a lark, which is something I rarely do. I’ve been hurt too many times… But I took a chance on this and then, out of the blue, I got the Blu-ray to review. Was I happy with my gamble? Was my horror-loving heart wounded again? Well, jump in the car, be careful of driving in the rain at night, and let’s find out.

Here a woman finds out that her mother’s grave in an isolated island town has been vandalized, so she goes to there with her boyfriend in tow. However, it’s during the island’s off season for tourists due to annual storms, so they are told by the guy that guards the bridge to the island (the always creepy Richard Break) that if they go there, they won’t be able to leave until the storms are over. Well, naturally, they go, and soon find a ton of weirdness waiting for them. There is also a mystery they must solve about the woman’s mother, why mom left the island community in the first place and never wanted to return, not even in death. There’s also the town’s residents that are out to protect the dark secret they all know, and even reality itself seems to be against the visitors.

The atmosphere in this movie is thick and heavy and wonderfully creepy. It has a great Lovecraftian feel to everything, and that’s a huge plus for me. Also, fans of HPL might be able to guess where things are going before the reveal of everything, but you don’t have to be a devotee of the Cthulhu Mythos to “get” or enjoy the story. The acting was all very good and the direction by Mickey Keating, who already gave us the horror/thriller movies Carnage Park, Darling, Ritual, Pod, and more. So with that kind of resume you know we’re in good hands here.

Alright, let’s get to the special features that RLJE Entertainment gave us for this new Blu-ray release. There, done. Wasn’t that nice? Yes, this disc is as bare-bones as they get and I’ve got to say I’m a bit disappointed. No, I’m pretty damn mad. I am a physical media lover, and collector and one of the reasons I love physical media so much are the extras and goodies that come with the movie. Scream Factory knows this. Arrow Video knows this. Synapse Films and Blue Underground know this. A lot of companies do, and RLJE Entertainment sometimes knows this, but I guess with this release they must have forgotten. Shame on you, RLJE, shame on you. Do better.

So despite the low-effort release of this movie by RLJE Entertainment, the movie Off Season is such a good movie that I do recommend getting it for your own collection. That is, unless you have Shudder. Unlike other Shudder and RLJE collaborations, this Blu-ray brings nothing new or extra to the table that you can’t already find on the streaming service. So if you don’t have Shudder then by all means, pick this up as the movie itself is worth it. But if you already have the horror streaming service, then you might as well give this one a pass. Shame.