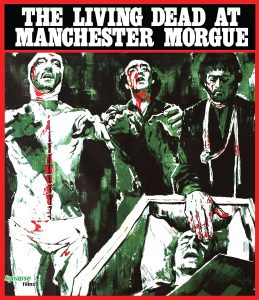 This film is a classic of the zombie genre. Also known as Let Sleeping Corpses Lie, this movie was made in 1974, years before Romero’s own sequel to Night of the Living Dead, Dawn of the Dead, came out and the legions of zombie movies that Dawn would usher in. Yet, surprisingly, it’s still not as known as many of those other capering corpses movies. Well, I’m hopefully here to change that in some small way, because if you’ve never seen this extant slice of horror cinema, you’re really missing out. So grab a gun, aim for the head, stay away from mysterious ultrasounds, and let’s head up to Manchester for some flesh-eating fun.

LDaMM was filmed in England with an international European crew, headed up by Spanish director Jorge Grau. What makes this movie so exceptional is its unique story and many firsts it introduced to zombie films. First, the dead start to pop up due to “ultrasonic radiation” the British agricultural department is testing out to kill bugs and pests in crops. I just always thought that was a great idea, and in keeping with the idea of man dooming itself. This movie is also one of the first zombie movies filmed in color, and that makes a big difference once the red stuff starts to flow. Speaking of that, this movie was also one of the first to have truly gory gut munching scenes. Sure, Night of the Living Dead had some, but there’s no comparing the graphic effects of Manchester to NotLD. Lastly, this film isn’t the traditional zombie apocalypse, it’s more of a mystery with select corpses getting up to no good. At the end everyone is safe…or are they?

This movie is the very definition of a forgotten classic, as many zombie fans today simply have never heard of it, and that’s a damn shame. It plays up both the mystery and the horror, and unlike so many other zombie flicks, LDaMM has some genuine creepy moments in it and not just gore, although it does have its fair share of that, too. Also, the look of the first zombie you see in here is amazing. He’s one of the all-time undead greats, and he still haunts my dreams to this day. Bub is too cute to do that, Tarman is too funny, and Big Daddy sure don’t. Nope, just this guy, so that’s saying something. Further, the cinematography in this movie is second to none. This scary and bloody movie just looks amazing. As for the acting and direction, it’s all good to great. I really have nothing bad to say about this film.

Now let’s shuffle on to the extras and goodies Synapse Films have put on this new Blu-ray release. There is an audio commentary track with author and film scholar Troy Howarth, and a second commentary with Nathaniel Thompson and Bruce Holecheck. There is a featurette about director Jorge Grau; an interview with Giannetto De Rossi, who did the wonderful and icky special makeup effects; and then a Q&A with the same man from the Festival of Fantastic Films in the UK. Lastly there is the original theatrical trailer, a collection of TV spots, and even some radio ads. That’s a pretty stacked disc.

The Living Dead at Manchester Morgue is an amazing and creepy film, and I’ve got to say that this is the best it has ever looked. But that is the norm for stuff from Synapse Films, who always go 110% on everything they do, except for the visuals. There they go 175%. Getting this one is a no-brainer (ha, zombie humor) and it is beyond highly recommended. It’s a must have for horror fans.