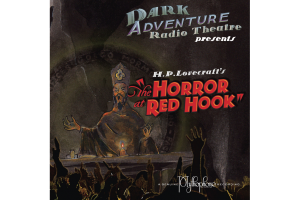 I love H.P. Lovecraft; his type of weird cosmic horror just speaks to me like few other genres of fiction do. Therefore, it’s no surprise that I am a huge fan of the HPLHS, or the H.P. Lovecraft Historical Society. They are a band of crazy cultists that have been making and selling tons of unsettling wonders guaranteed to drive you mad for years, from various works of art, to complete (and very good) rock opera based on HPL’s “Dreams in the Witch House.” From two feature film adaptations of Lovecraft stories, to tons and tons of high quality radio plays with their Dark Adventure Radio Theater. It’s this last aspect of their insane devotion that I want to highlight here, but really, if you are a fan of H.P. Lovecraft and his Cthulhu Mythos, then do yourself a favor and check out HPLHS.ORG for all of their amazing products. 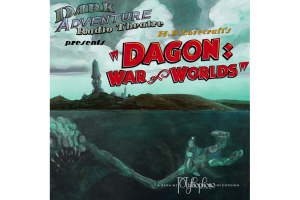 As for the Dark Adventure Radio Theater, I’ve been a fan since the beginning. They are lengthy radio plays or audio dramas based on Lovecraft’s most famous stories, such as The Call of Cthulhu, The Dunwich Horror, The Shadow over Innsmouth, and more. They are filled (and very well acted) with a large cast of characters and have music, sound effects, and even the occasional funny, fake advertisement to make you feel right at home during the golden age of radio. The quality of each episode of DART can not be stressed high enough. As someone that absolutely loves radio plays and audiobooks, the HPLHS DARTs get the highest marks for both entertainment and production. Now, I’ve already covered episodes 1 – 10 in previous reviews, so I’m going to tell you about the next three episodes that show some of the diversity that the HPLHS can deliver.

Episode 11 is based on Lovecraft’s story, “The Horror at Red Hook”. It is a very well done, enjoyable, and faithful adaptation of that tale of urban terror. Thankfully, a lot of the racist elements have been excised because, while I am a huge fan of Lovecraft’s brand of terror, he was a very flawed and bigoted person. That’s just facts. And sometimes (thankfully, not always) that bigotry and xenophobia found its way into his stories. So the HPLHS cut that stupidity from this story, and you know what? Nothing of value was lost and, dare I say, the tale was made all the better.

Episode 12 was a bit of a departure for the HPLHS. Instead of an audio play about one of Lovecraft’s stories, they blended two of them (“Dagon” and The Shadow Over Innsmouth) seamlessly and came up with their own story. And then, because that wasn’t cool enough, they decided to tell the tale in the style of a pseudo-news broadcast, very much like Orson Welles’ famous War of the Worlds. That’s why this DART episode is called Dagon: War of Worlds, and it is exceedingly excellent and entertaining. As someone that is very familiar with all of Lovecraft’s stories, it was great to see someone take two old classics, do something new with them, and do it so very well. This might be my favorite episode they’ve done yet. 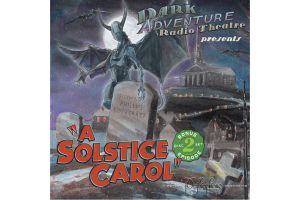 And lucky Episode 13 is A Solstice Carol. Here they took Charles Dickens’ A Christmas Carol and applied it to the work of HPL. Lovecraft steps into the role of Ebenezer Scrooge, and he is visited by the ghosts of Solstices past, present, and future. This leads to takes of three of Lovecraft’s shorter, but still well-loved, stories that might not be long enough to warrant a DART episode all on their own, those stories being “The Festival,” “Pickman’s Model,” and “The Outsider.” These experiences change the curmudgeonly Lovecraft for the better and make him into the author that would shape the worlds of horror, sci-fi, and the weird for years and years to come.

Everything that the H.P. Lovecraft Historical Society does is top-notch and very entertaining. That especially goes for their Dark Adventure Radio Theater recordings, which are both very faithful and do interesting and new things with very old stories. If you are a fan of HPL, then I am sure you know all this already, so I’m preaching to the gibbering choir. If you are a fan of audio plays and dramas, then you will absolutely love these productions. If you are a fan of dark and horrific podcasts, then give these a listen and try something a little different but still amazing. So yeah, I’m basically saying that no matter who you are and what you’re into, I’m pretty sure you’ll love these as much as I do. Consider them highly recommended.