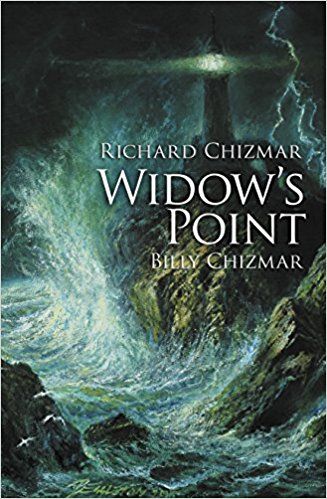 When you are invited to review a book that’s already been reviewed by the likes of Stephen King, Peter Straub, and Kealan Patrick Burke, it gives you pause. Obviously if these people like the book and have given it their stamp of approval, what am I doing here? Is there really anything I can add to their expert opinions? The answer is yes. What I’m adding is the “person on the street” review for everyone who waits on tables or fixes cars for a living and wants to know if this book is worth their hard-earned cash. Regular Joes and Janes, this review is for YOU! Ready to read? Okay! Buckle up and let’s roll.

If you don’t make time to read Widow’s Point by Richard and Billy Chizmar this year, you are doing yourself a severe disservice. Yep, this book is really that good! Anyone who digs speculative fiction is going to love this book. As will anyone who enjoys a story well told. Widow’s Point is perfectly paced and the tension just keeps building until you are as frightened as the narrator is. For the writer-readers among us, we all know how difficult that is to do. But the Chizmars make it happen and man, are we glad they did! I was hooked by the end of the first page and was unable to stop reading until the horrible end, which isn’t an absolute final conclusion. Widow’s Point ends in a way that leaves room for continuation of adventures and mishaps should the authors wish it. Especially given the elasticity of time that seems to exist in the dark world of the Widow’s Point Lighthouse.

The story begins at 6:09 p.m. on Friday July 11, 2017 in the small town of Harper’s Cove, Nova Scotia-Where supernatural nonfiction writer Thomas Livingston has arranged to have Ronald Parker, the current owner of the Widow’s Point Lighthouse, open its door and allow him entry. It is the first time the lighthouse has been opened in 30 years. At his request, Livingston is locked inside the spooky old joint with just the bare necessities until 8 a.m. Monday morning. Besides the essentials, he also brings a video camera, audio recorder, pens, and notebooks to document his stay. Livingston’s plan is to write another bestseller by combining his experience at the lighthouse with its murky history. He is also hoping to edit his footage of Widow’s Point into a movie. But the video feed on the camera stops working the minute he crosses the threshold of the lighthouse, turning him into a narrator instead.

Something is very wrong with the Widow’s Point Lighthouse. The locals say that it is cursed, haunted, and contains dangerously dark powers that are not human. History shows that the problems started right from the day its construction started and continued until 1988 when it was shuttered forever. For extra security, a tall fence topped with razor wire was installed to keep curious explorers at bay. Not only is the Widow’s Point Lighthouse a beacon of evil, but the grounds surrounding it are contaminated too. At least two dozen deaths, disappearances, and grisly murders have happened there. Everything from movie stars committing suicide, to satanic rituals and the disappearance of two little girls. We’re talking major bad mojo, folks!  Initially, Livingston feels himself immune to the forces within the lighthouse and spends his first night in a rather celebratory mood, but it doesn’t take long for the place to get under his skin. First, it’s just little things. His flashlight goes missing, his food and water are tampered with, and he hears strange noises. Livingston retains his cheerful outlook until he “discovers” the journal of DC, who was murdered while living at Widow’s Point with her family.

The lighthouse gains a significant hold on Livingston and soon his cheerful front is crumbling. Terror begins to take a toll on the man’s mind and body as he continues to read the history of the cursed place. Livingston’s sanity takes major hits as the lighthouse continues to twist his limits. The writing is magnificent here! Strange things become terrifying! He’s desperate! He needs to get out of there! Too bad that he required Mr. Parker to lock him inside the lighthouse for three nights, isn’t it? He never thought that things would go so incredibly badly! What to do?

Well, at least you know what to do. Grab yourself a copy of Widow’s Point on February 28th and get reading! It’ll be one of the best choices you make this year. There’s the perfect combination of homey comfort and chilling fear to make this book one that you will want to keep on your favorites shelf so you can read it once a year. Somebody asked me if I liked Widow’s Point.  Do kids like chocolate milk? Do old men like smoking evil-smelling cigars? Do dogs like fire hydrants? Hell yeah! I love this seriously boss book! It is very modern, yet ancient and all the pieces fit together flawlessly. Without reservation, I encourage you to buy a copy of Widow’s Point (or preorder) in your favorite format. You WILL dig it!