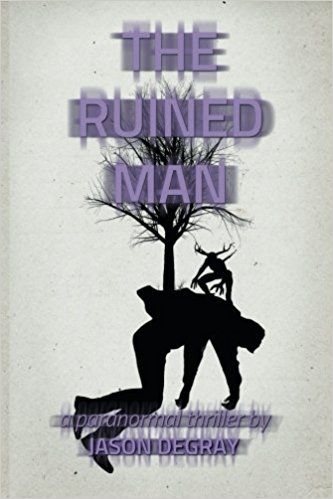 Now I don’t know about you, but I can’t help feeling a tingle of excitement when the book I’m reading is published in Roswell, New Mexico. Most of you reading this probably know all about Roswell’s interesting history that includes UFOs, extraterrestrial visitors, and our not-always-truthful government. Area 51 is legend! So it only makes sense that Roswell is also the home of Michelkin Publishing, the source of this unique paranormal thriller by Jason DeGray.

The first sentence of The Ruined Man is, “Magic is real and it is a filthy, evil thing.” This is also the last sentence in the book and you won’t have to read far to find out that’s true. The book opens with Detective Victor Wolf and his partner Frank Barber staking out the Purple Gates Chapel and its grounds for one Jonas the Unrepentant and his followers. The reason? Somebody has been on a killing spree that is causing many homeless folk to wake up dead. A mysterious tip sends Wolf and Barber to the not particularly holy church, where they find a group of shrouded creeps trying to raise a demon named The Lord of Murder.

While the detectives do find what they’re looking for, things get much worse when Wolf and Barber crash the party. Instead of collaring the bad guys and putting an end to their mumbo jumbo magic, Wolf receives a severe beat down from The Lord of Murder, Barber runs for his life, and the remaining demon worshippers get away. Many of the participants end up torn to shreds. Not a win for the home team!

Wolf convalesces for an extended time but remains covered by horrible scars, which marks him a ruined man. You might think that his boss at the Albuquerque Police Department would be pleased that Wolf was alive and coming back to work, but instead he shit-cans the detective. He also refuses to listen to Wolf’s account of what happened. Everyone, including his partner, Barber, keeps telling him that he was attacked by a bear. This leads to arguments and Wolf’s wife leaves, which turns their home into an abandoned house. Jobless, homeless Wolf wanders the city looking for answers and finds a lot more than he bargained for.

Before long, Wolf has allied himself with the man responsible for his ruin, Jonas the Unrepentant and a fellow named Ragnar. These guys are serious practitioners of magic, which they call “tricking.” There’s also a slew of bad guys that are either made from magic or have many magical tricks up their sleeves. Each person in this story has their own agenda, but the commonly held desire is to get possession of a book called “Power.” This book will give the evildoers massive control over the world. They also need a physical body for the Lord of Murder to inhabit and they are looking at Wolf and his family for that sacrifice.

The good guys have a score to settle and want to keep the Lord of Murder away from the general population. As things move closer to battle time, Wolf learns about magic symbols, words, runes, and a mixture of multiple spiritual forces from his new friends. Ragnar is the last surviving son of Thor, his wife is a powerful Native American medicine woman, and Jonas is a trickster. So there’s a lot of knowledge to assimilate in a small amount of time. Wolf is also a force to be reckoned with as a maverick detective. He is a big, strong guy with street smarts and a smart mouth. His ride of choice is a black 1970 Dodge Challenger and he keeps a small arsenal hidden in his house. However, when you’re dealing with the world of magic, a lot of physical stuff doesn’t amount to diddly. As we race towards the end of the book, battles rage, identities are revealed, alliances broken and…

That’s all I can reveal, good readers! To find out what happens, not to mention all the groovy details, grab a copy of The Ruined Man today! Overall, this is a fast blast of a read and I liked it a lot. The one issue that results in a four-star rating was how things got bogged down by having so many different kinds of magic, all having their own sets of rules and benefits. Let me be clear that this only happened to me because I didn’t possess the foreknowledge. Most readers will likely be a LOT smarter about this topic than I am and revel in the variety. The combination of brute force and magic makes for a good time! Oh, one last thing I wanted to mention is that book number two in what has become The Ruined Man Series is currently available now. The Dark Goddess keeps the party going with more adventures of Victor Wolf and company. So if you’re up for more magic, fast action, and cliff hangers, Jason DeGray and Michelkin Publishing have got you covered!