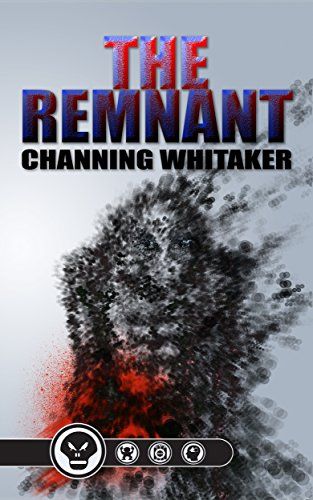 The Remnant
Channing Whitaker
Off Speed Press
May 21, 2018
Reviewed by Brian James Lewis

Channing Whitaker has got a hot new novelette coming out on Off Speed Press’ Black Band Shorts series that I think you’re really going to like! The Remnant is a fast run of tragedy, amazing coincidences, and ancient things that should not be messed with. But we humans are never happy just leaving well enough alone and accepting the world as it is. So when Gene Winfield has a chance to muck around with a book that has been clearly labelled as something mere mortals should not even read, he dives right in.

The Remnant starts with a woman named Hazel zooming around in mysterious ways. The things she comes across and does don’t seem to have any clear meaning, but keep your eyes open, folks. Everything will be revealed as the story unfolds. The next place we find ourselves is the green room for an Oprah-type TV show. Gene Winfield is just about to go onstage and chat with the famous talk show host, Liberty Strong, when his cellphone rings. He gets some very surprising news but can’t talk to the attorney on the phone right then, because it’s GO Time! He needs to be onstage stat to tell the world about his brand new novel! Fame is calling and it waits for no man or woman.

But the show doesn’t go exactly as planned and soon Gene is on his way to the estate of his late aunt, Hazel Winfield. Mysterious circumstances surround his aunt’s death and her mansion is um…very unique. At first, Gene is a bit put off by the whole situation. He’s a New York City boy out in the middle of nowhere. The kind of place where the town is so small, they roll up the sidewalks at night and when you shut off the lights, it’s really dark. Yikes!

Since he can’t order pizza or Chinese take-out, Gene starts poking around until he finds himself in his aunt’s study. Ah, now this is more like it! There is a massive old fireplace to heat the place and some very unique furniture, but Gene is really taken with the massive desk. There is a picture of him and his Aunt Hazel on it. Not only that, but all nine of his previous books are prominently displayed in her library. Gene sheds a few tears and feels proud that he made that much of an impact on this exotic adventuress’ life.

As Gene goes about getting a fire going in the fireplace, he finds something which was supposed to be destroyed. It’s a mysterious old book with which he becomes infatuated and reads the whole thing in one sitting. As many of us writer-readers find, there are others who can tell tales better than we. The Remnant knocks his socks off and Gene is inspired to write a tale similar to the one he just read. After doing a search, there’s nothing online anywhere, so he won’t be violating copyright laws. He really needs a career boost, so what could be the harm?

Turns out there is plenty of evil that is unleashed by Gene’s new book. But before that happens, there is a section of the book that made me smile. As Gene gets all ready to write his best book ever…beeyoop! His tablet’s battery dies. It happens to us all, right? The frustration of it all! You’re inspired and ready write, but you got nothin’. Then Gene’s disappointment turns to elation as he finds exactly what he needs to get the job done in fine fashion-a typewriter. I like this because I use a typewriter on a daily basis and there really isn’t anything quite like it for writing. As long as you have the time, like Gene does, there is something magical about pounding those words directly onto paper and watching the pages pile up. Minutes turn into hours and hours into days until Gene finishes his story. If we stopped here it would be a happy story about a guy who loses his mojo and gets it back.

But The Remnant is not a happy story! Not at all. While Gene is having fun at the old typeroo, strange noises keep happening. At first, he stops and checks around, but after finding no source of the sound, he lets it go because…writing. A surprise guest comes by and unfortunately takes some actions upon herself that are not in the best interests of the publishing world. As Gene rushes back to NYC in an ecstatic rush towards fame and fortune, something else gets there ahead of him and…

Well, my goodness! Will you look at the time? That’s all I can tell you about The Remnant today. However, I’d like to offer this piece of friendly advice. Snap up a copy of this brand new novelette today! Channing Whitaker has put together a great little book of speculative fiction that will not only chill you, but also make you smile. Five Stars!