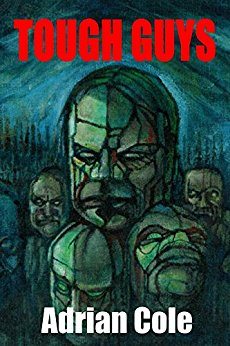 Do you like adventure stories with a supernatural twist? Then Tough Guys by Adrian Cole might be exactly what you’re after. Cole gives us four stories to enjoy in this volume that show us four very different types of tough guy.

“Wait For The Ricochet” is in a style that reminds me of pulp magazines featuring heroes like The Shadow from the 1930s. Not that the prose itself is dated, but because things happen on so grand a scale in a place where you know right away who the bad guys are. The hero is Nick Stone and the bad guy is one Lucien de Sangreville – a powerful dude who messes with Black Magic and is pretty good at what he does. There is a far-from-helpless female and other iconic good guys who all want to keep de Sangreville from raising the Devil – literally. There’s secret passages, codes, foolish rich folks…It is the stuff that legends are made of! Especially because the ending of this tale is more like, “Until next time…”

Taking a completely opposite direction for the next story “If You Don’t Eat Your Meat,” our tough guy is an incestuous cannibal. Ryan is about as different from Nick Stone as a person could imagine, but so are the times. The world is staggering along in a post-apocalyptic funk and food is rare, as is money. People are either stranded way out in the country and fighting for their lives, or crammed into cities with no money or street smarts. While there are some who are “helping out” the poor, they are also helping themselves. Ryan fights the system the only way he knows how and then eats his opponent. He encourages others to do likewise. It is meat! Is it not?

“A Smell Of Burning” takes us on yet another leg, and we find ourselves in a hospital with a man who has been horribly burned until he is nearly dead. Artificial everything keeps him alive. He eats and excretes through tubes, breathes with assistance…Life is not any too good. Yet, there is something interesting going on. The man is able to leave his body and move about the hospital he’s stuck in. Not only that, but he can hear the thoughts of many of the victims of a horrible fire they’ve all been through. While that is somewhat interesting, what really grabs our tough guy is that he thinks that he is tuning into the fire-bug’s brain. Turns out that the bad guy is in the hospital with the rest of them, but nobody knows that yet. Being immobile and barely able to speak without effort, our hero wonders what he should do. He finally decides to risk visiting the killer’s room in his invisible spirit form so that he will at least be able to point the man out to police when he is in better health. It is a struggle, but he makes it to the killer’s room and finds out something that he’d rather not know…

I am going to be honest regarding the fourth story in this collection, “Not If You Want To Live.” I couldn’t get a grip on it. That doesn’t mean the story isn’t good; it just wasn’t for me and I think that my attempt to interpret this one might be more of a muddying of the waters. I can tell you that it was a complex futuristic world and that the tough guy, Razorjack, is working against his will. After that, I got lost trying to understand everything. Since Adrian Cole has been writing since the 70s, I’m quite sure he knows what he’s doing! I would encourage you to try this collection if only for the first story alone, which I enjoyed immensely!