The Things That Grow With Us – Book Review 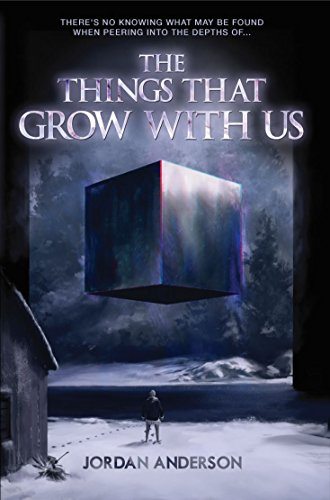 Straight out of the gate, let me say that I have a great deal of respect for any writer or publishing company who sends me a note telling me that they want a fair review. The hell with just being my usual nice guy self! Jordan Anderson has the confidence in his writing and wants to use this as a chance to better himself. Well, that raises my opinion of the man and his work right away. So without further ado, here is a fair review of Jordan Anderson’s The Things That Grow With Us!

My overall feelings are that this is a great collection of stories in a very strong book. There is no room for chaff in this mill! Anderson’s writing is his own, but you could make comparisons to H.P. Lovecraft in his love for detail and the slowly mounting terror in his stories. There is also a good deal of science fiction in the mix that might make one think of Ray Bradbury for the humanity and Michael Crichton for the tech end of things. The opening story “The Further We Soar Into Madness” demonstrates this mesh quite well. We are on a high-tech space journey to planets impossibly far away in search of the ancient ones and the power that alliance would grant. Harold Jamison is a man hell-bent on this goal and will do whatever he has to in order to achieve it. That includes lying to his crew, knowingly sending his own brother to death, and spending incredible sums to acquire the necessary materials. One thing it does not include? Sharing his secret knowledge with others. The sole exception being his equally self-absorbed son, whom he has promised to visit upon his return from space.

While the first story is the longest, that doesn’t guarantee it’s the best. There are many fine gems to be enjoyed in this collection. Such as “The Tides Of Oblivion” – a story that makes you think some young pup is about to get a beat down in a den of thieves, when just the opposite will occur.

“Of Sand And Wine” is an emotionally intense story of loss, but also gain for a special girl who discovers her powers of the mind while her mother drowns herself in drink.

What if there were a chance to bring back someone you loved from death? Would you try it, even if it meant trafficking with evil dark forces? A man tries to do this for his granddaughter in “Burials,” only to find out that nothing is free. Instead, he reaps horrible results that require intervention.

Speaking of frightening and devilish creatures, do you think it is possible for them to have “Angelic Tendencies?” You might find yourself feeling very surprised! A young girl trapped in human-made hell calls on her angels to rescue her from a perverted creep, who just happens to be her uncle. As things get worse, she figures that her prayers are not going to be answered. But her angels do come to her aid, just not exactly the way she expects. Nor is she ready to see her rescuers who appear to be tiny…devils.

Perhaps they dwell in “The Gore Hole?” Anderson sends us on a psychedelic journey into an opening leading to another world. It is too much for mere humans to comprehend, so it destroys the minds of those exposed to it. Adults would probably not stick their heads into it, but children will!

At the end of this book is my favorite story. Anderson obviously had to place it at the end, because after reading “Warmth In Winter” you will be done for the day. Your mind will be full in the very best of ways. This story drags you through nearly every single emotion in the human psyche over its course. It starts with Old Man Jack living an isolated life as a sort of self-punishment for an accident that took his wife and son. It’s snowy, bitter cold, and dangerous. One mistake can cost a person their life. He is warned about weird events that occur on a certain night of the year, but he lives there for many years with no problems. Until the night of the story, that is! Then all hell breaks loose when a strange black tide covers the snow and attempts to get him. There is a creature trying to get into his cabin and Jack is sure that it means him harm. The poor man is run through Hell, into paradise, then left in limbo. To escape from that, he needs to make a life changing decision. That’s him on the front cover, being amazed and confused by this black, tar-like substance that can change shape at will. Jack takes the path offered him with high hopes of something better than just existing alone.

Highly recommended reading! There is not a dud in the bunch, and Jordan Anderson knows how to pull off some really awesome work! I guess my fair review ended up being a good review! That is always a pleasure! Try The Things That Grow with Us, his collection! You will be glad you did!