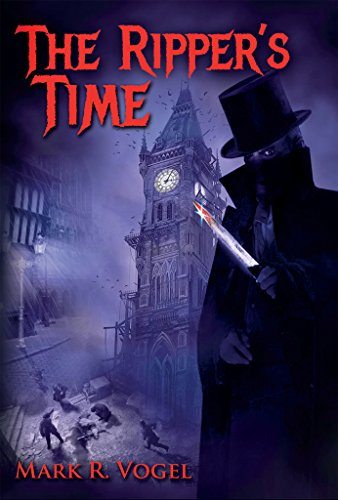 WOW! This is a book that hits the reader from all angles! There is Jack the Ripper, a timeless romance, mystery, and time travel. Not only is The Ripper’s Time multi-faceted, but author Mark R. Vogel goes into great detail on each of these topics. He’s done the research, and in fact, regularly lectures on the infamous case. Not only that, but his doctorate in psychology gives him more access to the “whys” of the puzzle than the average Jack the Ripper buff. He obviously has a great store of knowledge about London in the 18th century that makes his characters breathe. We’re not reading a boring historical tome, we are there. You smell the filth, feel the cobbles, and taste the blood as the Ripper’s unfortunate victims are slain. Into all of that, Vogel splices in the year 2014 and Henry Willows, a man who wants dearly what he cannot have. Or can he?

After a lifetime of researching the enigmatic Jack the Ripper cases, Henry practically knows everyone involved. He knows all the streets, the locations, and the events to come before and after the Ripper murders his victims. Not only that, but Henry is quite sure that at least one of the victims has been misrepresented. Catherine Eddowes is not just some stupid cheap floozy whom no one should care about. She’s a unique and lovely lady with more of a story to tell. If only he could meet her, talk to her, and see her alive! Henry feels deep in his heart that Catherine is his one true love. Not only that, he wants to rescue her from being felled by the Ripper’s blade so that there might even be a chance for romance between them. His best friend, Flugey, tries to dissuade him from his dreams by pouring on the reality. Henry hangs on like a bulldog, yet there’s a deep frustration that his dreams cannot be satisfied. Catherine will be killed, the Ripper will remain unknown, and the world will move on.

Amazingly enough, Henry gets his chance to travel back in time and make his dreams come true, thanks to a physics professor who most of the campus shake off as being insane because he believes in time travel. Henry boards the time machine and is transported into London, England circa 1888. Is it wonderful? Hell no! Awful is more like it. Things do not go according to his careful plans at all and it looks like the whole rescue mission might be a bust. He gets beat up numerous times and even becomes a suspect in the Whitechapel Murders himself! Not exactly saving the day. Henry even loses his chance to return to modern times. So he’s pretty well fucked. But one thing he has on his side that no one else has, is knowledge.

Against all odds, Henry prevails. Among much turbulence, he wins Catherine’s heart and they have some time together. It is wonderful until Henry finds out that you can’t screw with the fabric of time without some very serious consequences. Instead of stopping, the Ripper continues killing people. Not only that, but he somehow knows who Henry is and sets his sights on destroying him. Bollocks! The overworked London police are not interested in any help from some know-it-all Yank. Neither will they help or protect him. Henry does make a few solid friends, but he needs more than that to save himself and Catherine. The Ripper is closing in and looks like the end for Mr. Willows and Ms. Eddowes until something miraculous happens…

Since I’m no spoiler, that is as far as my teaser is going. I will tell you that the book positively gallops in the last third and many interesting details are revealed in the mind blower conclusion (for now — there could be a sequel). This is a deep read, not a skimmer. Because there are so many tiny pieces, if you miss one, you will have to go back and retrieve it. That being said, Mr. Vogel knows how to make all of his story elements work together seamlessly. Do I recommend it? I bloody well do! Buy a copy of The Ripper’s Time and tell me if ya don’t think this blighter puts together one hell of a case! As for me, I’m off to the Ten Bells for a pint and to meet up with Slug and the boys. We better see you with the book in your hand soon…