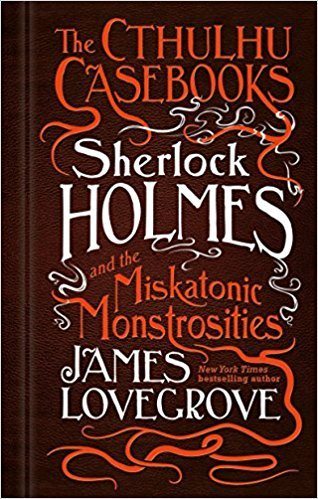 The thesis: The Sherlock Holmes stories and novels penned and published by Dr. James Watson were fabrications, carefully bowdlerized to hide the true nature of Holmes’s exploits from his readers and from the human race in general. Beneath their façade of unrelenting rationality lies a deeper, darker alternate reality—that this world and its inhabitants are constantly threatened by manifestations of the Great Old Ones, the Outer Gods, and their untold numbers of minions, human and otherwise.

Beginning with The Shadwell Shadows, continuing in The Miskatonic Monstrosities, and concluding with the final volume, the forthcoming The Sussex Sea-Devils, the Cthulhu Casebooks recount the adventures of a more saturnine Holmes than Watson’s stories lead one to expect, one whose perceptions have been altered by confrontations with creatures that, in a sane world, would not—could not—exist. But they do.

And Holmes alone has the mental acuity and the persistence of will to combat them.

The Miskatonic Monstrosities begins with a “Preface” by Lovegrove, which provides a provenance for the manuscripts containing the three tales, along with a prolonged refutation of those who might argue that he is himself the author. On the basis of style and structure alone, he notes, readers have no choice but to agree that this story in particular came from Watson’s pen, an assertion bolstered by the following “Foreword” by Watson, dated 1928, laying the foundations for the novel.

The two levels of authorial reassurance prepare readers for the opening chapter, in which Holmes and Watson are running for their lives from supernatural creatures in the London underground. In fact, however, they are springing a trap for a pair of ghasts, “anthropophagous abominations” preying upon lone travelers.

Following that brief excursion into the supernatural—a necessary bridge between the Holmes of popular fiction and Sherlock Holmes, monster-slayer—the story moves to its main focus: unraveling the mystery of a recent addition to Bedlam’s ranks of the insane. An amnesiac has been found, naked, scratched and scarred, hideously maimed, and seemingly incapable of coherent thought. The doctor in charge is an “alienist” named Simon Joshi (and with that, the bells in the back of the mind begin ringing).

What clinches Holmes’s interest in the man is that he speaks in what Holmes instantly recognizes as R’lyehian, the arcane language of the Outer Gods. Identifying the man as Zachariah Conroy leads to the discovery of his journal, which in turn details a disastrous expedition up the Miskatonic River by Conroy and a fellow student at Arkham’s Miskatonic University, Nathaniel Whateley. Living up to his family’s reputation for meddling in the unspeakable, Whatley’s purpose is nothing less than to capture eldritch creatures said to haunt the wilderness along the upper reaches of the river. And indeed, he achieves his goal with the capture of a shoggoth.

But there is more to Nathaniel Whateley than appears on the surface. As it progresses, The Miskatonic Monstrosities becomes an intricate puzzle centering on the nature of identity and of monsters, human and otherwise. In the opening and closing segments, Holmes and Watson must consistently re-think clues and re-consider their roles in the mystery; in the center portion, Conroy meticulously details his introduction into the world of Lovecraftian Old Ones and their ultimately destructive plans. When the two narratives merge near the end, Holmes’s and Watson’s hard-won assumptions are again challenged and final clues educed, climaxing in a confrontation with a manifestation of one of the Gods in temporarily human form.

Lovegrove does a solid job in reproducing Watson’s Victorian English and Conroy’s Bostonian Americanisms. And he succeeds admirably in re-creating the tone and tenor of Conan Doyle’s original tales, even while merging them with the florid prose associated with Lovecraft. The result is a stirring tale of action and adventure, a foray into ratiocination in a world whose boundaries extend beyond reason, and an expansion of the roles of the Great Old Ones and the Outer Gods and their interactions with humanity.

And, along the way, a fun, thought-provoking read.