Cthulhu Deep Down Under – Book Review 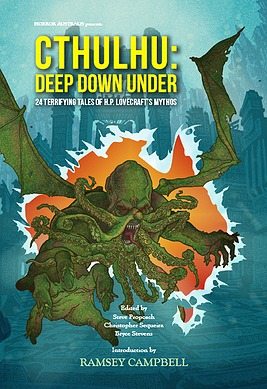 From my earliest introductions to Australian dark fantasy (notably Peter Weir’s eerie 1977 film The Last Wave), I have enjoyed and applauded its unique sense of the eccentric, of the ‘off-center.’ And what better venue for exploring off-centeredness in horror than to take elements of H.P. Lovecraft’s well-known Cthulhu Mythos and stand them on their heads—physically, as it were—and allow the alienness often associated with Australia to interact with what Ramsey Cambell points out in his introduction as Lovecraft’s desire to “communicate a sense of the utterly alien.”

The ten tales incorporated in Cthulhu Deep Down Under investigate this interaction beautifully. Each begins at a known point, a quotation or a paraphrase or a familiar psychological landscape, and moves beyond it into territory untouched by Lovecraft but situated comfortably within his imagined cosmos.

Janeen Webb’s “A Pearl Beyond Price” sets the stage. Following a citation from “The Strange High House in the Mist,”  she introduces us to the fearless Michiko, a native pearl-diver on a south-seas island inhabited exclusively by women…and surrounded by monsters. What follows is superficially an island seduction story as a Norwegian ship arrives, with its tall masts and handsome young men, then turns rapidly to betrayal and brutality, until the true master of the island makes known its will.

“Haunting Matilda” is a bit of a difficult read at first, since Dmetri Kakmi thrusts readers into a tale with no context; indeed the unravelling of that context is the tale, and the romantic seduction described in Webb’s story here gives way to horrific sexual abuse and child abuse that—in our current climate—might have difficulty finding an outlet among North American publishers. But again, also as with Webb’s story, Lovecraftian echoes arise and with them, the “Sleepers in the Hills,” to wreak their terrible justice.

Lucy Sussex’s “Wife to Mr Lovecraft,” a series of comments inscribed on South Seas postcards, offers a disjointed series of vignettes written by “Sonia (once Lovecraft but now Davis),” that suggests that more people than HPL were blessed/cursed with the ability to discern the monsters among them. Jason Frank’s “Darkness Beyond,” on the other hand, though similarly told through dated vignettes, depicts the monsters of the deep as a final salvation, a rescue from the man-made horrors of imprisonment in Port Arthur.

Kaaron Warren’s “The Diesel Pool” centers on a young woman, a prostitute whose clientele includes both men and ghosts, and whose adventures in the subterranean warren of the Old Parliament House excite her clients, and the tentacled creature that dwells beneath it.

In “Dreamgirl,” Stephen Dedman travels deep into the heart of the outback—in the Gibson desert—in search of a treasure trove of gold hidden in australites/tektites…along with a particularly horrific kind of justice for the displaced and maltreated natives.

My favorite story, in terms of  verbal pyrotechnics, if nothing more, is William Tevelein’s hysterical “The Thing in the Bidet: A Tale of the Shrdlu Mythos.” If the title is not a sufficient tip-off, the opening sentence, warped from “The Picture in the House,” lets readers know that in terms of pure volubility, Lovecraft may have met his match:

As the incautious excursionist approaches the malodorous purlieu of the legend-haunted village of Dumpwick, Massachusetts, his initial impressions do not infrequently bear striking similitude to those one might reasonably expect to be engendered by such mythically horrid vicinities as Tartarus, Erubus, Tophet, or much of New Jersey.

Subsequent reference to the “Ginnantonic River,” the “ill-reputed Histrionic University,” or nearby Farkham adequately set the stage for a verbally tumultuous tale of a tentacled monstrosity…in a toilet. Perhaps the crowning moment is the incorporation of the “Necrophilicon of Abdul Alhazbihn (or the “bipolar Iranian” as he was more commonly known by his few friends, innumerous victims and the Book of the Month Club).” With this one, simply sit back and enjoy.

Christopher Sequeira’s “The Return of…” introduces Lovecraft’s seventy-five-year-old hitherto-unknown son, Howard Phillips Lovecraft, Junior, on a one-man mission to halt filming of “H.P. Lovecraft’s The Return of Cthulhu” on location on the island of Pohnpei. More than just the film, millions of dollars are at stake…as well as the future of humanity itself.

“The Elder Things,” by B. Michael Radburn, shifts from Australia proper to the land even farther down under…Antarctica, where a climatologist struggling to escape an unanticipated storm discovers the remains of a 1936 expedition, including a mysterious notebook inscribed with words such as Necronomicon, Shoggoths, Elder Things, and Cthulhu.

The final story, the novella-length “Vanguard,” by Aaron Sterns, rounds out the anthology with a story of imminence, the gathering of the “Avanhara. The Vanguard. The ones who will usher in the true owners and destroy us all.” Against the representatives of supernatural and supernal powers, a handful of humans must fight to discover what secrets a solitary young woman might hold. As always, what is at stake is nothing less than all life on earth.

Each of these tales shifts the Lovecraft Mythos in new directions, explored new possibilities. Each is eminently readable, given the fact that each attempts to deal with things unknowable, unspeakable, unimaginable. And each plays its part in creating thoroughly enjoyable, often insightful, and always intriguing riffs on the familiar.