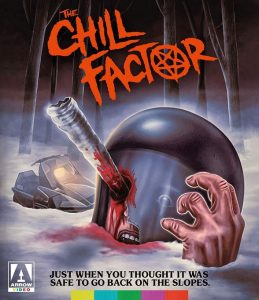 When I first got this movie in for review I was really excited. I barely remembered this late 80s slasher ski movie, and while nothing great, I’m a sucker for such things. Then I saw the release date: 1993. Then I remembered that the name of the movie I was thinking of was Iced. And then I watched this movie, which I had never seen until now. Was I pleasantly surprised by a hidden gem that had somehow slipped me by? Or was I left scratching my head and wondering why Arrow Video would bother putting this out on Blu-ray? Or was it somewhere in between? Well, let’s find out.

This 1993 effort has a group of young snowmobilers going out for some winter fun on a lonely, wooded, frozen lake. One of them has a nasty accident and so the group seeks refuge from a storm in an abandoned church youth camp. Unfortunately for them the camp was used by Satanists to do Satanic shenanigans and before you can say Beelzebub, people are getting possessed and others are getting killed slasher-style and then possessed.

So yeah, this is straight up Slasher 101 with all the tropes. Normally that is a plus in my book, but it takes a long, looooooong time for anything to happen here. The acting is amateurish (even for a slasher movie), the story is basic, the kills are nothing to write home about (the best being a death by icicle), and if you’re looking for some good ol’ naked ladies to spice things up, then you’ll be disappointed. Well, unless naked backs do something for you. This film has a lot of those.

As debatable as the quality of the movie is, there is no doubt that Arrow Video has shown this forgotten flick some love. There is an audio commentary track with special makeup effects assistant Hank Carlson and movie podcaster Josh Hadley. There is an interview with production manager Alexandra Reed, another with stunt coordinator Gary Paul, yet another with special makeup effects artist Jeffery Lyle Segal, and one last interview with the aforementioned Hank Carlson. There is also the original workprint of the film on here, a still gallery, and the original home video trailer. So yeah, once again Arrow has put out a very fine release packed with goodies. So there is that.

The Chill Factor isn’t a horrible movie, but it is far from a good one and that might be the reason that this film has been forgotten. Good on Arrow Video for bringing out rare and unknown films like this, but I can only recommend it for the hardest of hardcore slasher fans, lovers of 90s low-budget cinema, or collectors of Blu-rays from Arrow who just got to catch them all. Everyone else should give this one a pass.