Shadow Out of the Sky by Brick Marlin – Book Review 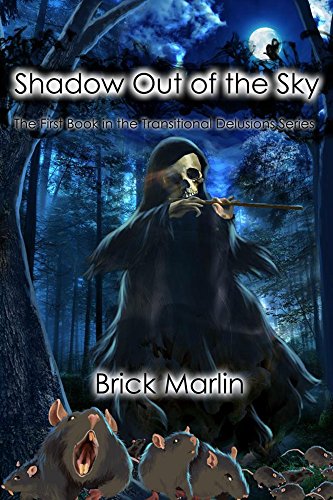 This is the first book in the Transitional Delusions Series by Brick Marlin, an author of over 25 published short stories and more than five books by independent presses. So obviously, he hasn’t just arrived at the party. Apocalyptic horror is definitely where it’s at right now and Shadow Out of the Sky is a book that combines that with religion, and the legend of the Pied Piper to make a very disturbing mix that moves quickly and relentlessly. Ready or not, here they come!

And you won’t be ready for chapter one! WARNING: People who are easily offended by graphic violence please make another selection. A couple of sweet little kids stab and slash their parents into chunks of stew meat so smoothly and easily that the reader might put the book down and run away from it in fear. Especially because that’s just the very tip of the iceberg. ALL the little children in Woodbury get to killing all the adult folks in town with all matter of strange weaponry. There’s steak knives, ice picks, hatches, and bats just to name a few. Something that is very handy for the attackers is that everyone’s electric power, and all phone service for the area is cut off. It’s kind of hard to call for help or reinforcements either. Not that there’s anyone to call. The crazy kids killed everyone at the police station in less time than it takes to fix a flat tire.

The characters in the story are widely varied and in kind of flip-flop mode. The people who are smart and level-headed die first. While the town drunk and his long-suffering wife die close to last after finding out that it wasn’t just an isolated incident in their town. Everywhere is messy and full of half-eaten corpses. One of the surprise monster kid butt kickers is Martha, an older woman who prays a lot and knows how to use a shotgun real well. A truck driver named Tray keeps being helpful and making good use of the biggest weapon they have, his tractor-trailer. Besides them, there’s the creepy pedophile Barry Freckles, who lived a life of incest before his mother passed away. Having the children attack Barry seems like pure justice, and for a short moment we almost cheer. But after they get what they want from Barry, the kids are even more fired up and urgently look for more targets until they kill every adult in town.

The evil spirits possessing the children are four evil entities called The Reckoning. They are visible only to those who are dying and the children. Their immediate leader is a pied piper named Kabul who has lived a very long time. He uses a flute to call the children and the rats they are mutating into and direct them. As the few surviving adults gape at the children and piper before they are wiped out, Martha explains that they are in the early days of the apocalypse. Soon the end of the world as we know it will be happening. Things look pretty hopeless, but the ending of this book has a nice little twist.

Just a very small bit of critique. I have to agree with some of the reviewers on Amazon that the cover could have been done better. Especially since the cover for book #2 in the series looks kickass! The other thing, which I am not the first to mention, is the high number of typos. Not a deal breaker, but it makes reading the book a little choppy at times. I am guessing these things happened at the printer’s and it looks like they are stepping their game for book #2 in the Transitional Delusions Series. Overall a good read. Brick Marlin’s enthusiasm can be felt on every page. I could easily see this series of stories being turned into a TV show, or possibly a movie. Excellent description and believable characters! Recommended!