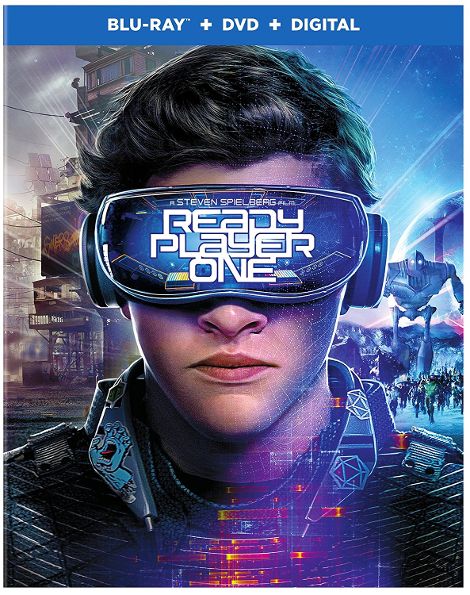 I’ve heard this film described as “Spot the Pop Culture Reference: The Movie” and to an extent that is true. But hell, that’s a large part of the fun. Take that away and you still get a sci-fi dystopian future story about VR and losing your identity in an artificial world more tantalizing and attractive than the real one. That’s all great, I hear you say (and here it is), but why is this being reviewed by you for this site? Well, horror plays a big part in not only my personal world of pop culture, but in this film as well. So without further ado, are you ready, Player One? Then let’s get started.

In the future the world sucks so bad that everyone damn near lives inside a virtual reality on-line multiplayer game called The Oasis. Because the creator of the game was a mega nerd and a child of the 80s, the game, and therefore this movie, is jam-packed with pop culture references to the 1980s. Music, movies, video games, cartoons, and jokes (those things that existed before memes, although there also plenty of memes in this too) from the 80s are all over the place in here. That goes double for the characters. If you have a favorite fictional character, chances are good that they are in here somewhere. Pop culture junkies are in danger of overdosing in this movie, so be warned.

As for the story, the aforementioned creator of The Oasis died and left an Easter egg hunt in his game for three keys. Whomever got the keys and solved the riddles and puzzles would get half a trillion dollars and control of the global sensation that is The Oasis. Naturally everyone is trying to get this prize, including a big, nasty, greedy company (boo, hiss) and a young man who is our poor, awkward, downtrodden everyman. Gee, I wonder who’s going to win? Yeah, yeah, the story is about as cliché as they come, but the same can be said about many movies. Also this is one instance where the trip itself is far more enjoyable than the destination.

So why is this being reviewed here? Because appreciation of horror plays a bit part in this pop culture landscape. Nothing is really all that frightening, but that’s not the point. This is a celebration of all things cool and the horror genre gets more than its fair share of love in this. There are countless horror pop culture characters running around in the background for you to play “spot the scary” and put a big grin on your face. One of the three tests/key quests takes place in an extended scene from someone’s “11th favorite horror movie ever” and I really loved that bit. Then there is the mashing up with a somewhat modern meme with an unexpected cameo that got me laughing. All I’ll say about that is “Focking Chucky!” There’s more, but I will leave you to find them, or not, as that is one of the things that makes this movie so much fun.

Let’s get to those special features Warner Brothers has given us for the new Blu-ray/DVD combo pack. First, as is usual with Spielberg movies, there is no director’s commentary. Come on, Steven, get with the times. But there are quite a lot of featurettes on here for you education and enjoyment. There’s one all about the 1980s, that decade that’s at the heart of this film. Sadly that one is rather short at just five and a half minutes. There is an almost hour-long making-of about bringing the book to life on screen. There’s a 25-minute-long look at all the amazing CGI effects and worlds used in the film. There is an eight-minute featurette on the sound design, and another 10-minute one on the music/score for the movie. Lastly there is another 10-minute featurette on the author of the novel, Ernest Cline and the star of the movie, Tye Sheridan. Oddly there is no trailer. Is not having your trailer on the disc a thing now? It seems to be. Regardless, that’s a bunch of cool things for this movie all about cool things.

Ready Player One is an unapologetic nostalgia bomb of a movie. A fun, fast, CGI thrill-ride down memory lane with the rose-colored glasses firmly in place. But I am fine with that. I am a consumer of pop culture; the 1980s is my wheelhouse decade. I have unabashed nerd love for many things from that time so this film is preaching to the choir when it comes to me. I think if you can separate yourself from all that you still end up with a fun little sci-fi action flick, but I can’t separate myself from all that, as all that is a large part of who I am today. So yeah, I may be a bit biased, but I don’t care. I adore this film and highly recommend you picking it up when it comes out July 24th.