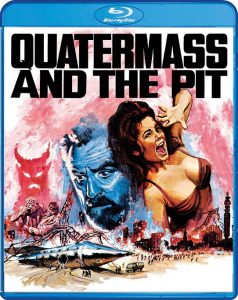 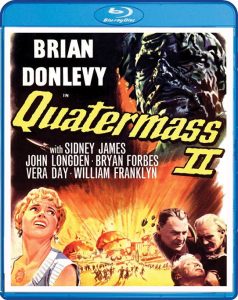 I love these two flicks of classic British sci-fi horror and you should too. Why? Well both are penned by Nigel Kneale who is an amazing storyteller and a big influence on one John Carpenter. How big? Well he wrote (uncredited) the first treatment of the script for the once underrated Halloween III: Season of the Witch. Carpenter even paid homage when he wrote his mind-bending sci-fi horror movie, Prince of Darkness, which he did under the pen name of Martin Quatermass. Both movies (as well as the first Quatermass film that’s not included here, no doubt due to rights reasons) fall deep into the category of Lovecraftian horror, which always makes me smile. Lastly, both were put out by the legendary British horror studio, Hammer Films. What, did you only think they made Gothic horror flicks? So yeah, these films have enough horror street cred that any and all fright film fanatics should have them in their collection, and now thanks to Scream Factory, you can get both on Blu-ray. Looking better than ever and loaded with extras and special features. You can stop reading right here if you want; I highly recommend both of these releases, but if you want a little more information, well, here it comes.

Quatermass II (AKA Enemy from Space) is the 1957 sequel to the 1955 The Quatermass Xperiment. Yes, it was intentionally spelled like that. Anyway, you don’t need to have watched the previous film to jump right into this one, or the one that would follow (Pit). Here Bernard Quatermass is an honest-to-god rocket scientist and when one of his spaceships returns to earth, unexpected horror is unleashed. Two of the astronauts are missing and the third is sick and not talking. Before you can say, “this ain’t good,” the survivor is changing into god-knows-what and the bodies start falling. This is great cosmic horror of the most cosmic kind, taking a 50s trope and playing it very straight with weird fiction flourishes and a great cinematic monster.

Ten years would pass before Quatermass and the Pit (AKA Five Million Years to Earth) would be released in 1967. And while I like the previous two films in this series, I absolutely adore this third one. This movie has so many great ideas in it that trying to write a short synopsis for it will be difficult without giving all the cool surprise bits away, but I will try. While digging a new tunnel for London’s Underground rail system, workers find the ancient, caveman-like remains of what could be humanity’s ancestors. A more shocking discovery is found right next to those old bones, an “almost metal but not” ship of some kind. Naturally, thoughts first turn to it being a spaceship, but doubters suggest that it could have been a Nazi rocket meant to be a panic-inducing psychological warfare weapon. Since the ship is “sort of” rocket-like, the government calls in their leading rocket scientist to investigate the find. Enter Professor Quatermass and his posse of assorted academics.

Further investigation uncovers the craft’s occupants: insect-like aliens that bear more than a slight resemblance to medieval gargoyles and demons. Researching the history of the area finds that this place has always been shunned and considered haunted by many. In the past, it has been called “Hob’s End,” “Hob” being a nickname for the Devil, and there have been many reports over the years of strange, poltergeist-like activity, especially whenever the earth was disturbed. Well, since digging a subway tunnel is one hell of a disturbance, something is soon awakened in, not only the ship, but in the more sensitive human minds nearby. What follows are thought-provoking explanations of humankind’s origins on Earth, racial memory, psychic powers, and perhaps the very nature of evil that lives inside all men. You know, the same old story.

So both movies are great, but how are the extras on the new Blu-rays from Scream Factory? Well, the Quatermass II disc has three audio commentaries, one with film historian Ted Newsom, one with two other film historians, Steve Haberman and Constantine Nasr, and the final one with director Val Guest and writer Nigel Kneale. There are also interviews with director Guest, special effects guy Brian Johnson, and assistant director Hugh Harlow. There is a segment from the old documentary, World of Hammer, about their sci-fi movies, that runs for 25 minutes. A U.S. theatrical trailer and a still gallery round things off.

For Quatermass and the Pit there are three more commentaries. The first is with film historian Brice G. Hallenbeck, the second has Steve Haberman and Constantine Nasr returning, and the third is with director Roy Ward Baker and once more, writer Kneale. As for interviews, Brian Johnson comes back for one, actors Hugh Futcher and Julian Glover each do one, then we have one with the clapper loader and the focus puller just for good measure. But wait, there are more interviews coming. There is one with Nigel Kneale’s wife, and author and illustrator, Judith Kerr. Actor and writer Mark Gatiss talks about Hammer Films, novelist and critic Kim Newman gives us his thoughts, there is an interview with Hammer Films historian Marcus Hearn, and then director Joe Dante shows up to talk about his love of Hammer movies. The same episode of World of Hammer, the one on sci-fi, is here just in case you don’t have the other disc. There are also two trailers, TV spots, alternate U.S. credits, and a still gallery.

As you can see, these Blu-rays are loaded with extras, and as you can surmise from my gushing, I think both of these films are great. So consider both Quatermass II and Quatermass and the Pit highly recommended.