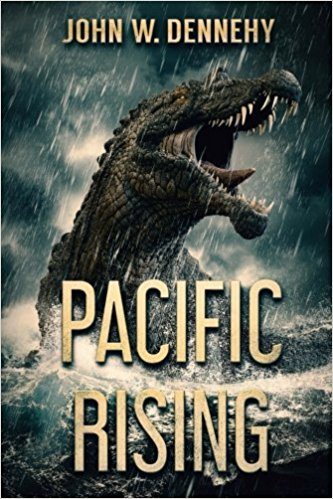 We are living in dark times. Nothing is really a “sure thing” anymore. Even in rural areas, the majority of the population doesn’t assume they’re safe. We have learned, sadly enough, that the good guys don’t always win and the weather can often turn into a force of mass destruction. Happy times turn tragic way too often.

That is why books of the type we review here are more important than ever. Really. We need to escape the world we live in and take a mental journey elsewhere. Either into strange and speculative worlds, or ones full of suspense and terror. For just a little while we are caught up and taken away from our troubles. Sometimes the best morale booster is to read a book in which the good guys DO win while fighting against impossible odds. For that very purpose, I recommend Pacific Rising by John W. Dennehy!

Nearly everyone is familiar with Godzilla, a huge and destructive beast that rose in the infancy of the world’s Atomic Age. He broke a lot of ground (literally) and gave the world an evil entity to focus all their fears of mushroom clouds, nuclear fallout, and horrible death on. Stop-motion animation, and obvious model cities have reduced our modern-day opinion of him. Godzilla is funny, quaint even, and something that’s okay to let the kids watch. Godzilla is/was a Kaiju – A giant, T-rex type of monster that is highly destructive and nearly impossible to kill. Many folks feel that there could be more than one of these amazing creatures.

In Pacific Rising, Dennehy puts a Kaiju into our high-tech, modern world and this monster has no interest in being quaint. It adapts quickly and seems damn near indestructible! Zamera bursts onto the coast of Japan during a horrible tropical storm that becomes a deadly hurricane. While the storm does plenty of damage and fells multitudes of people, that’s just the beginning of the bad breaks for all involved. While the citizens of Tokyo and its military forces are suffering the actions of Zamera, American forces are doing their best to batten down the hatches offshore in prep for the hurricane. Add in a super-secret missile recovery mission being done by Navy SEALS off the coast of North Korea and you have a suspense-filled action thriller that keeps you turning pages!

Dennehy thrusts us right into the action. People are running from the storm and into the Kaiju by page three! Awesome, right? The story is also quite realistic. A mission into North Korea, the detail-filled reporting about the branches of the military forces involved, hard decisions being made by powerful people, and a child being able to help the Marines at a crucial moment. There are even looters in Tokyo trying to make a buck off of a tragedy, which sounds very similar to recent events in the world. Pacific Rising puts us right in the middle of things with a front row seat.

We follow Master Gunnery Sargent James Penton, Captain Kate Able, Zamera (the Kaiju), Maki and her family, and Navy SEALS Harding and Stiles throughout the book. The pieces fit together quite smoothly and with lots of hard work by the characters who are all trying to do the near impossible. It is only after everything is secured at the base that the Marines are asked for help and they give it their all! Eventually, it comes down to Penton, Able, and Maki. I’m sure everyone has an opinion about this, but I like that the author has the good guys win. It gives us the important affirmation that Good will triumph over Evil in the end. There is also a touch of romance that warms the book up nicely and makes us care about the characters more.

While I hate to say the C-word even before Halloween has passed, I think this book would make an excellent Christmas gift for many people. It’s a fun read, clean on the language, and carries a lot of positive messages. There’s also a cool monster! I recommend this book 100 percent! Good stuff! Last, but definitely not least, I want to say that I think Pacific Rising would make one hell of a cool movie. Chalk up another 5 stars for good guy John W. Dennehy!