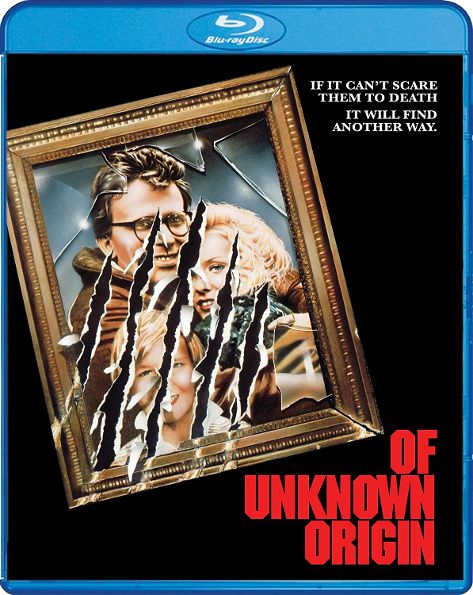 Of Unknown Origin is a low-key thriller/horror flick that has gone under a lot of people’s radar, despite the fact that it has some notable people associated with it. Starring Peter Weller before he was Buckaroo Banzai or Robocop, and it’s directed by George P. Cosmatos who gave us the 80s blockbusters of Rambo: First Blood Part II and Cobra. It is based off a novel (admittedly one I have never heard of) and was released by Warner Brothers who put some money into the marketing back in the day. So why is it so unknown today? Is it just that bad or is it an unjustly forgotten gem? Well, thanks to Scream Factory this film is out now on Blu-ray, so let’s go into the unknown and find out.

Wanting to do for rats what Jaws did for sharks, this movie is about Peter Weller’s character, Bart. Bart is a busy, busy businessman with a nice house, a nice family, and a nice job. It is because of that job that Bart stays home from a family vacation to work on some high-stress project. You see, Bart is all caught up in the rat race…get it? Well, into his well-ordered and over-stressed life an unwanted visitor comes: a rat. Not just any rat, but a huge, supernaturally smart, and freakishly aggressive rat. A rat that all it wants to do with its little rat life is torture, torment, and (ex)terminate Bart. It starts with little, annoying things but the war between man and beast continues to escalate until it’s an all-out blood game. It’s the top of the food chain vs. the ultimate survivor – who will win?

There are a few things that make this movie well worth a watch. First, it’s George P. Cosmatos’ more-than-capable direction. Not only does he handle the actors and action well (I would expect no less on that last part coming from the guy who would do two of Stallone’s best movies) but there is good tension and suspense. Further, keep an eye always out in the background of scenes where Weller is hunting for the rat, as there are often hidden surprises that the character doesn’t see, but we can. These little bits don’t take anything away should you miss them, but if you catch them, they add a lot to the cat-and-mouse game between the man and the rat.

The other highlight is watching Peter Weller go slowly but totally s***house rat (ha) insane. He starts with trying to ignore it, then obsessing over it, to learning everything he can about his little, furry adversary. Little by little the two make moves and countermoves in their lethal chess game until the final, violent, bloody, over-the-top confrontation. Watching Bart’s descent into madness is a lot of fun and the best thing about this movie. But the rat is kind of cool too.

Let’s get to those extras Scream Factory did for this new Blu-ray release. First and foremost there is an audio commentary with director George P. Cosmatos and star Peter Weller. There is an interview with Brian Taggert who wrote the screenplay and that runs for 18 minutes, another interview with producer Pierre David that’s 14 minutes, and then one with actor Louis Del Grande that’s also 14 minutes. There are two theatrical trailers that seem to have sold this movie like a haunted house flick, and a still gallery. So not a ton of extras, but more than I would have thought for such a forgotten film like this.

Of Unknown Origin is a great when-animals-attack/man-against-wild movie. Fans of that kind of nature-run-amok horror should have fun with this one. Of all the “rats are evil” flicks, this is one of the best, and so I can easily recommend it.