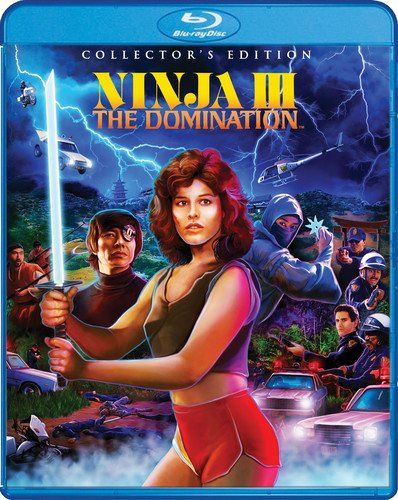 The awesome Scream Factory first release this amazingly fun and incredibly 80s film about ninjas and possession by evil spirts a few years back. I love this movie and to have it in glorious HD made me very happy. That said, other than a good transfer there wasn’t much to this Blu-ray release, at least in regards to extras to special features. Now I don’t blame Scream Factory for that, they probably didn’t know how well this classic cult movie would be received so they do doubt wanted to keep their cost low. Well there must be a bunch of people out there that love this movie as I do, because it has now warranted a new collector’s edition of the movie. Is there enough new on this disc to make it worth a get? Well let’s find out.

Ninja III begins with, surprise, surprise, a ninja in America taking out some crime boss, in broad daylight, on a golf course. Naturally, being a ninja, he gets the job done, but not before the entire L.A. police department is called out on him, including a helicopter. All this does is piss this ninja off, so he then proceeds to kill 30 or 40 cops in style, including shooting a blowgun dart into the barrel of a gun so that it backfires and throwing a ninja star with his foot! But sheer numbers eventually win out and after taking enough led that would have dropped Jason Voorhees, our psychotic ninja does the old disappear in a puff of smoke trick.

Enter Christine, a telephone repair person and quintessential cute 80s girl. She finds the bullet-riddled ninja and tries to help, only to get possessed by the ninja’s dying spirit for her troubles. So she picks up the fallen ninja sword, keeps it, and reports the dead guy to the local police. Next enter Christine’s love interest; a smart-mouthed young cop named Billy. Now Christine doesn’t know it yet, but Billy was one of only five cops to survive the ninja’s golf course slaughter and that’s unfortunate, as the evil spirit now inside of Christine is hell bent on killing all the police officers who gunned him down.

Before you can say “sword to the face,” Christine is slicing and dicing her way through cops, not to mention getting possessed by lasers coming out of an arcade machine (because you know, ninjas!) and trying to get rid of the evil ghost inside her through a hilarious Chinese exorcism overseen by James “David Lo Pan” Hong. Other highlights include at least four jazzercise bits (because it was the 80s and all movies back then had to have jazzercise in them somewhere; I think it was the law), Christine trying to use the power of 80s pop-rock and dance to overcome a spiritual possession, a hot tub ménage à trois that goes oh-so-wrong, and an over-the-top climax that includes possessed monks and a ninja burrowing into the earth, Superman-style. And hell, with all that going on, I forgot to mention that the original Mr. Ninja himself, Sho Kosugi is also in here as a good ninja looking to put the bad ninja down for good. Now that equals one hell of a fun slice of 80s ninja action!

Now the first Blu-ray of this had one commentary track and very little else. So how does this new collector’s edition compare? Well, first there is an audio commentary with director Sam Firstenberg and stunt coordinator Steve Lamber. Then there is an isolated score with audio interviews with Misha Segal who did the music for the film and Elliot Ellentuck who was the production designer. There is an interview with actress Linda Dicky that runs for 18 minutes, an interview with Jordan Bennett who played the cop love interest that’s over 10 minutes, and then there is an interview with producer and stuntman Alan Amiel that’s nearly 12 minutes. There is a “Trailers from Hell” segment with screenwriter Josh Olson, the theatrical trailer, a still photo gallery, and a behind-the-scenes photo gallery. So yeah, this is an edition that this amazing movie deserves.

Ninja III: The Domination is 100% awesomeness sprinkled with a healthy dose of HELL YEAH. It is, in a word, fun! I love 80s ninja movies, and this one could be a contender for the most 80s and ninja-rific of them all. It is silly, goofy, surprisingly not too gory, actionpacked, over-the-top, downright funny, and completely badass. If you grew up watching ninja movies on cable or VHS like I did, then chances are you already know how cool this flick is. If this somehow escaped your notice until now (you know, like a ninja!) and are looking for some 80s action fun, do yourself a huge favor and pick this new Blu-ray up.