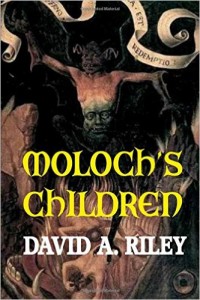 What can I say aside from David A. Riley’s Moloch’s Children short of the fact that if you love the idea of a haunted house, a writer with an overactive imagination, Satanists, and so much more – you will love this book! Honestly even though it took place in more modern times it felt like a throwback to the slow build suspense work and the strong hints of Satanism that were both quite popular in the 60’s and 70’s. Riley knows not only how to strikingly set the mood but build upon that foundation to have an entire story weaved together which will keep you wondering what will happen next.

The main focus on the novel is the Elm Tree House which has a long and sordid history. Or should I say that the grounds it stands on do and it has acquired it by association. That hasn’t stopped Oliver Atcheson who is recovering from the loss of his wife to purchase the property. His dream for it is to create an artist’s colony there and with the steal he purchased the mansion at it seems like a dream that will easily be made a reality. That is of course until the repair bills start piling up as well as what the locals think about the place.

We also get to learn about others who are both interested in Oliver’s project or have become associated with him. Of course anyone who knows anything about the house seems to be holding some of the information back and we have plenty to discover as the pages turn.

They’ll be turning quickly too because for everything question that is answered, two more pop up. In a move where the suspense constantly builds as well there is no way to put the book down until you get to the bitter end.

In some ways I was reminded of Ti West’s film The House of the Devil though there really is no direct comparison between the stories. Still, much of the way I felt the mood and descriptions worked here really seemed to apply to both the film and novel.