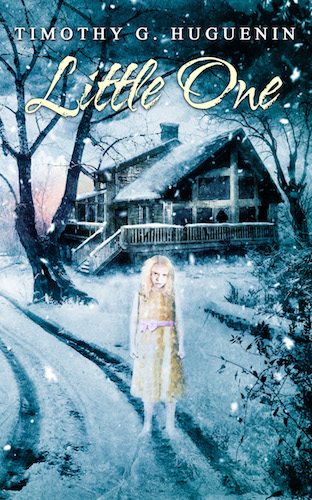 When you read a really great first novel from a young writer, you wonder what will be next and how it’s going to measure up. Well friends, you can relax and rejoice, because Little One is even better than When The Watcher Shakes. Wait, both books are great, but with Little One, Timothy G. Huguenin shows us how much he’s progressed in a short time. The writing has more maturity and the story line is super strong. There are no extraneous characters or lengthy descriptions, just a perfect balance that makes this book feel unnervingly real.

Little One begins with a grim and chilling couple of pages from the little girl on the front cover. She is angry, very angry and wants vengeance for the bad deeds done to her as a child…

Then we are on a plane with Kelsea Stone, a modern young woman who works and lives in the hustle and bustle of Los Angeles, California. She’s flying to what should have been her old home place in West Virginia to take care of things after her parents passed away. But since she’d been fostered out at a very young age, Kelsea doesn’t feel very connected. Since there’s no other living heirs, everything is being handled by a local lawyer by the name of James Pendleton. He seems to be a real nice fella and Kelsea can’t help but notice that he’s quite handsome. “Gentleman” James drives Kelsea where she needs to go in town, gets the funky old house semi-liveable, and the big one. He loans her his truck. Talk about romantic!

So what’s the problem? It starts as unease on Kelsea’s part, but gradually keeps creeping up to higher levels until the dynamic conclusion of the book. A local old timer tries approaching Kelsea to warn her about Jimmy’s agenda, but she thinks the old hick is creepy and won’t listen. Even when Jimmy gets downright weird, she still thinks he’s a right guy because he matches up to what she’s used to, slick fast-talking fakes. However, she finally becomes convinced by some special characters you will meet in the book, but not before some people die.

Turns out that Kelsea and the little girl in the yellow dress share a lot of things, much to Kelsea’s amazement. Canaan Valley, West Virginia is a unique place. Not only do most of the means of communication that we take for granted not work there, but some of its citizens are highly spiritual folks if you get my drift. This creates a special environment that for some is bone-chillingly creepy and for others, just home. Maybe with all that technology out of the way, souls can exist on a deeper and stronger level that is both freaky and wonderful at the same time. Once everything is revealed at the end of a pulse-pounding downhill run, you will be blown away!

Little One is both a murder mystery and a horror novel in one. That one-two punch that fans of Stephen King and many other famous writers have been sold on for years, because it delivers. Your curiosity gets going, you chase it, then crap your pants in fear. It’s the sign of a talented writer to make you keep repeating that cycle faithfully until the end of the story. I predict that Timothy G. Huguenin is one of those special writers and that someday we’ll be reading his 20th book and it will be even better than the 19th! While I like to encourage all the writers I review, there is something special about this guy. Not only does he have a passion for the craft of writing, but he’s also really into the place he’s writing about. He lives there and loves it. That’s the difference in what makes a writer great. We’re not just any old place, we’re right where he puts us. As you can guess, I highly encourage everyone to read Little One. It will chill your bones and warm your heart!