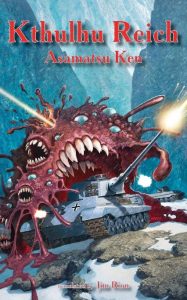 Kurodahan Press has made a name for themselves by bringing Japanese horror, most notable horror well steeped in the cosmic weird fiction that H.P. Lovecraft championed, to the English-speaking world, and I love them for that. Before them I had no idea that Cthulhu and his cousins were so big in Japan, but I was pleasantly surprised to see that the ideas of HPL not only translate so well, but come back to us with so much added flavor. And one of the best modern fusion chefs is Ken Asamatsu, a king of the creepy and a wizard of the weird. Three cheers, then, to Ken and Kurodahan Press for putting together a new collection from the author that melds two of my favorite flavors of fear: the Cthulhu Mythos and war stories. Specifically in this case, dealing with the very human evil of the Nazis in World War Two and their brushes with the comic horror of the Lovecraftian Mythos.

There are seven stories collected here, and not all are set during World War Two, as near-modern tales are presented here as well as earlier stories that set up the horrors (WWII) to come. One such story, “April 20, 1889,” connects the murderer Jack the Ripper with the birth of little boy who will one day have a funny mustache and will set the world on fire. Then there is “Dies Irae” set in 1944 about the failed assassination attempt on that same man.

“In the Wastelands of Madness” is a sequel of sorts to Lovecraft’s own “At the Mountains of Madness” where the little corporal (no, not that one, the other one) sends an expedition to search for an Antarctic paradise, who find it. It, and a whole lot more they never expected to find. While in “The Mask of Yoth Tlaggon” Japanese intelligence agent tries to uncover a plot from their good buddies and allies, the Nazis.

These and other tales mixing history, war, the occult, Lovecraftian characters, real world monsters, and the Cthulhu Mythos await in this book. From U-boats off the coast of South America, to the fog-shrouded streets of London, to the ice-capped peaks of Antarcticia and everywhere in between, if you are a fan of cosmic horror and alternate takes on military history then this in the book for you. Even if you’re not, I still say give this one a shot as it both charms and chills from page one and gives you a glimpse of familiar horror as seen by another culture. Ken Asamatsu is a great story teller and I thank Jim Rion for translating, and Kurodahan Press for publishing, these tales and making them accessible all over the world. Yeah, you can consider this book well recommended.