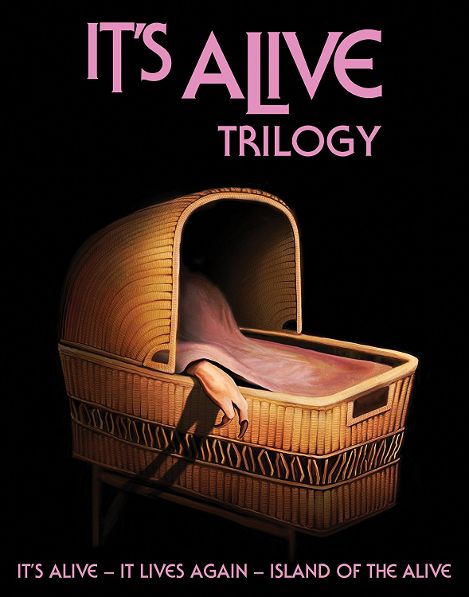 The epic monster baby trilogy from the 70s and the fevered mind of Larry Cohen at last gets the collector’s Blu-ray treatment from the epic Scream Factory, but does it deserve all that or is just a campy drive-in movie, something to laugh at and nothing more? Well grab your Gerber’s, a fresh pack of Pampers, and a .45, and let’s find out.

In the first film, It’s Alive from 1974, a couple is about to have their second child, so no big deal as they’ve already been to this rodeo before. But then unexpectedly, BAM, monster baby! The killer crawler wipes out everyone in the delivery room except its mother, and then escapes into the night to terrorize LA. The film deals more with the parents and how they deal with the social stigma of having an inhuman killer as a child and exploring a possible ecological or pharmaceutical cause to the infant’s mutation, than the shenanigans of the monster baby. While that adds more drama to that admittedly B-movie, if this movie has one flaw it is that there simply is not enough monster baby in this monster baby movie. Still, what little we do get is fun, and funny, and I love monster baby. Not to mention the oh-soseventies aesthetic that is all over this movie. So yeah, the first flick is a winner in my book, how’s the next one?

Well since It’s Alive was a surprise hit, a sequel of course followed in 1978 called It Lives Again. This time another young couple is about to have a monster baby of their own and the father of the very first critter comes to help them out. At the same time the government is rounding up monster babies and killing them. This film is more interested in exploring the moral and legal ramifications of monster babies than any cool monster baby action. Even more so than the first movie. Yes, there is some action in here, but not a lot, so this one did feel like a step backwards for the newborn (ha) franchise.

And audiences agreed with that, as it took almost ten years for the third film, Island of the Alive, to come out in 1987. This time around long-time collaborator and muse of Larry Cohen, Michael Moriarty, plays the father of the newest monster baby. But now the law steps in to stop the government slaughter of “innocent” monster babies, so instead they place all the babies on a deserted island and let them fend for themselves. Seems like a bad idea to me, but these monster babies grow up fast, and when Daddy Moriarty and some scientist come to check up on the kids in five years, they are no longer monster babies but monster adults (kids grow up so fast) and now having monster babies of their own. This movie has the most monster baby action of all the films, including some neat stop-motion animated monster babies. I also prefer 80s cheese to 70s cheese and the always over-thetop and deliciously hammy Michael Moriarty is a lot of fun. Sadly this was the last monster baby movie until the remake, but I don’t count that one.

Let’s get to the special features and goodies that Scream Factory put on this new Blu-ray triple pack. The first movie has a commentary track with writer/producer/director Larry Cohen. There is an 18-minute retrospective about all of the It’s Alive movies and a 13-minute featurette about its 40th Anniversary theatrical screening. In addition to that there are radio spots, TV spots, a theatrical trailer, and a still gallery. For the sequel, It Lives Again, there is another commentary with Larry Cohen, a trailer, and a still gallery. And then for the final film Mr. Cohen returns for another commentary track and there is an interview with special makeup designer Steve Neill that runs for ten minutes. A trailer and a still gallery can also be found here.

This box set is classic campy Cohen goodness, and I love that. Sure they have a few more things to say about pollution, drug companies, parenting, law, and all that, but I love them for the monster babies. If you can get behind that idea and don’t take your movies too seriously, you’re likely to have a lot of fun with these flicks. I sure did. Consider them very recommended.