In the Mouth of Madness – Blu-ray Review 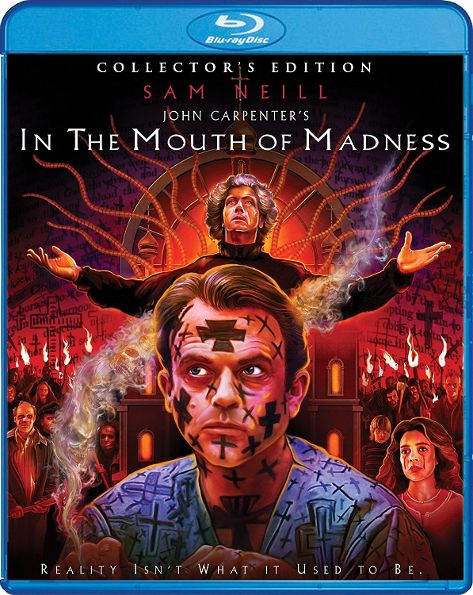 1994’s In the Mouth of Madness is John Carpenter’s last love letter to the horrific ideas that H.P. Lovecraft gave to the world. The final part of what Carpenter would call his Apocalypse Trilogy (the first two being The Thing and Prince of Darkness) it is my least favorite of the three, but does that mean it’s not good? Well, grab your favorite Sutter Cane novel, don’t mind the blue filter or the stench of your own extinction and let’s find out.

Sam Neill plays an insurance fraud investigator named John Trent who is hired by a big publishing house to find their most successful, and now missing, cash cow: an author named Sutter Cane. This guy writes creepy, weird stories about alien gods and Eldritch horrors and he is even more popular than Stephen King. Well, he’s now gone and his latest book is way past due, so Trent and a gal-pal liaison from the publisher go looking for the wayward writer. Trent does some detective work and thinks he knows where Cane is. The only problem is it’s a fictional location…or is it? Well, it has to be real because the pair find it, but that’s when stuff really starts to get weird.

At its heart In the Mouth of Madness is all about reality, how malleable it is and how, if the majority of people were insane, a new reality would be defined. Very cool, weird, and frightening stuff right at home in the stories of H.P. Lovecraft. For the most part the Lovecraftian ideas are clear and strong, with only a few missteps along the way. So if you are forever looking for a film that gets that man’s ideas right more often than not, In the Mouth of Madness is that movie. But what if you don’t give a whit about H.P. Lovecraft and his literary legacy? Well, then you have icky, slimy, tentacle-waving monsters, Sam Neill doing the tough PI thing well, Jürgen Prochnow hamming it up and having fun as Cane, reality-warping ideas and gags, crazy guys with axes, old ladies into handcuffs, David Warner who is always cool, Charlton Heston surprisingly not shooting things, and Darth Vader (no, really) as a kid on a bike stuck in a time loop. The film moves at a brisk pace, has plenty of visual style, well-done practical effects, a rocking soundtrack, the last really strong direction by John Carpenter, and a mix of creepy cosmic horror and black humor. It is a solid effort by all involved and it’s a film that I only grow to appreciate with every viewing.

Okay, let’s get to those madness-inducing extras that Scream Factory has put on this new Blu-ray release. There are two commentary tracks on here. One is with director Carpenter and producer Sandy King Carpenter and the other is with John Carpenter and cinematographer Gary B. Kibbe. There is a Horror Hollowed Grounds featurette with Sean Clark where he visits the locations used in the film. It runs 11 and a half minutes and I always love these. There is an interview with Julie Carmen that runs almost 10 minutes, and an over 16-minute interview with makeup effects master Greg Nicotero who did all the creatures and other nasty bits in the film. There’s 12 minutes of behind-the-scenes stuff for the original shoot, including a gag where tentacles explode out of a popcorn bucket that was sadly not used in the final film. There is a vintage (from 1994) making-of featurette that’s just over five minutes long. Last but not least there is a collection of TV spots and a theatrical trailer.

In the Mouth of Madness could be called John Carpenter’s last great movie. No, it’s not perfect; it doesn’t nail the Lovecraftian feel 100 percent, and compared to some of his earlier works it misses a few beats, but it is for sure a far sight better than anything he would do after it. If you are a fan of horror, Carpenter, H.P. Lovecraft, Sam Neill, Carpenter’s Apocalypse Trilogy, creature features, madness movies, or any combination of the above, you need to get this new Blu-ray. It looks amazing in HD, comes with a bunch of extras, and is the best version of this film out yet. For all those reasons and more I give it an easy recommendation. Make sure you pick it up when it comes out July 24th.