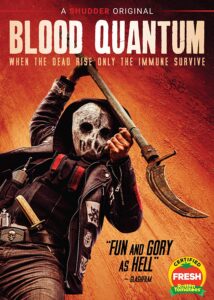 Once again, horror streaming service Shudder and RLJE Films team up to bring another film to the masses on disc, and I love it. This time it’s a new zombie apocalypse movie with a bit of social message. Is it worth a get for horror fans? Well don’t forget to aim for the head and let’s find out.

This one focus on a group of First Nations people. Think Native Americans, but up in Canada. They’re living their lives as normal when out of the blue, oops, zombies! The story element that sets this tale of the shambling undead apart from all the others is that, for some unknown reason, the First Nations folks are the only people immune to the undead plague. They can’t be turned into zombies by bites or anything else. So now all the other people in the larger nearby town, all white people, must come to the tribe for help and protection. And if you don’t see how that can be funny, then you haven’t paid attention in history class. So basically this is a story about race inside a zombie story, and this kind of deeper story inside a horror movie should be familiar to anyone that has watched movies by George A. Romero. Unfortunately, like Romero’s last three …Of The Dead films, the message forgot how to be subtle and clever, and it’s pretty in your face. Is that a bad thing? No, and it doesn’t really hurt this movie for anyone wanting just a fun and gory zombie flick, as Blood Quantum delivers that and does it well. I also like turnabout here, I just like my satire to be less obvious, but as I said, this is a failing that even the father of all zombie movies succumbed to, so I can’t tsk-tsk writer/director Jeff Barnaby too much for that. Hmm, maybe that says more about the attitudes of filmmakers towards modern movie audiences than anything else?

Let’s get to those extras that RLJE Films put out on this new DVD. Aaaaaaaand we’re done. Yes, this release is as bare-bones as bare-bones gets, and that’s a shame, as this movie deserves better. I refuse to believe not one person is willing to talk about this film, the director won’t do a commentary for it, or that no one was filming anything on the set with their phones or any other way. So other than wanting to do something as cheaply as possible, there’s no reason for this to be such a lackluster release. That’s sad, but if you don’t have Shudder, don’t let that stop you from giving this one a watch.

Blood Quantum is a very good, and at times gory, zombie flick with an interesting play on the usual idea. If you are a fan of cavorting carnivorous corpses, then you’ll like this film. The fact that it will make you think about things you might not otherwise is a bonus. Consider this one well recommended.