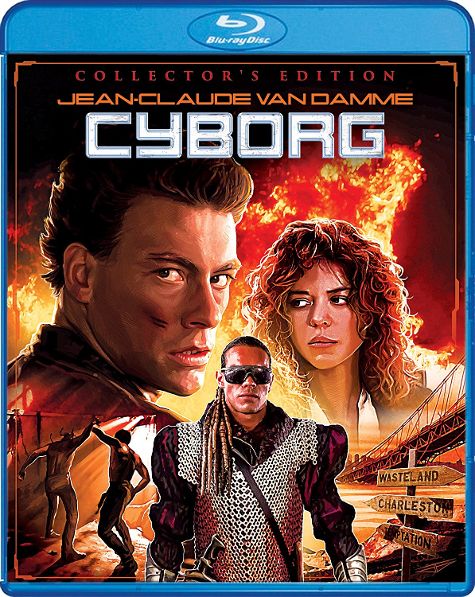 Both written (using a pen name) and directed by Albert Pyun, who gave us some great B-grade action flicks from the 80s and 90s (and who is still at it today) comes perhaps his biggest and best known film: Cyborg from 1989 and staring the Muscles from Brussels: Jean-Claude “hey I can do the splits” Van Damme. For some reason this is getting released through Shout! Factory’s horror label, Scream Factory. That’s a little strange, but I guess that mean I can review it here, right? So gather your knives, make sure you do some warmup stretches, and let’s go into the dark future of Cyborg.

Things start off with your typical post-apocalyptic landscape in a world that has been ravaged by plague. Surprisingly JCVD isn’t the titular cyborg, that would be a woman who holds the secret cure of the plague in her memory banks. Jean-Claude is the “slinger” (gunslinger, maybe? It’s never explained and the guy only has one gun that doesn’t work all the time) who will safeguard the cyborg to Atlanta and the CDC. His name is Gibson Rickenbacker. Standing in the way of the pair is a gang of raiders led by a warlord with cold blue eyes (that he loves to reveal in dramatic fashion) and a voice like he’s choking on a Matchbox car: Fender Tremolo. Yes, if you haven’t guessed by now, everyone here is named after guitars and musical terms. Because why not?

The star of the show is the many fight scenes, and those are well done. Albert Pyun knows how to shoot action a thousand times better than many directors working today. Of course Jean-Claude Van Damme is a natural at this and delivers the goods, He also, in my opinion, has more charisma, or is just more likable, than many other martial arts movie bad asses at this time. Yes I am looking at you, Steven Seagal. And despite his silly Christian-Bale-as-Batman voice thing, the main baddie played by Vincent Klyn is suitably menacing. Cyborg is a paint-by-numbers action flick, but it’s done well. It never reaches any heights, but neither does it dip into any slumps, and a good, brainless, well-made action flick makes me very happy.

On to the extras we can find of this new Blu-ray release thanks to Scream Factory. There is an audio commentary track with writer/director Albert Pyun and also a retrospective of the film that runs for a half hour. There is a featurette on the effects for the movie and how little money they had and how they did the best they could with what they had. That runs for 12 minutes. There are extended interviews from various people related to the movie from the excellent documentary: Electric Boogaloo: The Wild, Untold Story of Cannon Films, and these run for an impressive hour and three minutes. A still gallery and a theatrical trailer bring the special features to a close.

Cyborg is check-your-brain-at-the-door fun. It’s Jean-Claude Van Damme doing what he does best, directed by a man with a good eye for action movies. It is not a horror film and really shouldn’t be released by Scream Factory, but I am happy it is. This version looks great and comes with some nice extras so yeah, I can easily recommend this one.