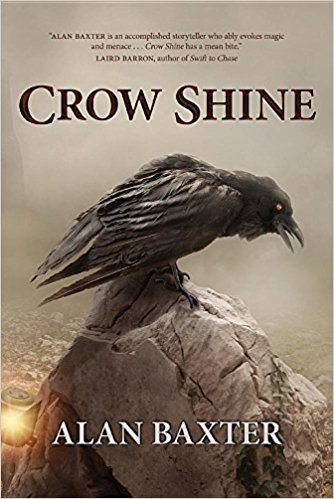 This collection of intense speculative fiction from Alan Baxter is definitely one of a kind. Reason being, that Crow Shine is filled with all kinds of different stories that are not connected very much setting-wise, but are strongly connected by the concepts underneath them. What Baxter’s stories, and the novella length The Darkest Shade of Grey illustrate is that it is not always smart to take things at face value. There are a lot of forces controlling the world around us and while they are close by, it takes a little digging or sometimes a bad mistake to reveal them. Also, many of the people who seem lowest on the totem pole to our uneducated eyes are often the most powerful. Those of us who think we’re smart and know what we’re doing are often messing ourselves instead. A good example of this is Beat of the Pale Wing when the mobsters who are using the demon/entity to clean up their dirty jobs and abusing their power by hurting those that love them get schooled by a stronger, more passionate woman who turns the force they’ve been exploiting back on them.

The Darkest Shade of Grey shows us that angels are not just the gentle and peaceful creatures depicted on Christmas cards and in gift stores. Sometimes they operate like “company men” and have to handle a “problem” just like mafia hit men. They’re not so saintly after all! Tiny Lives is a beautifully sad story about a father who is sacrificing his life to save his youngest daughter by making toys that are alive. I took away some social commentary there too. The story showed that while many of the wealthy people were happy to spend a large amount of money on amazing toys, no one seemed very interested in paying for a life-saving surgery. So this selfless father had to sell his life in order for his daughter to live. Just kind of brings to mind some of the U.S.’s mega-rich families like the Kardashians or Trumps who make news when they buy a five thousand dollar outfit of see-thru clothing for Kim to wear (again) to display her expensively altered self, but not on a replacement kidney for a little child.

Crow Shine’s title story is a great mix of old and new. A young man learning to play classic acoustic blues guitar like Robert Johnson from his grandfather gets a horrible shock when the old man dies suddenly in a fire caused by his moonshine still. At first Clyde grieves, then he rebuilds and remakes the shine that his grandpa refused to let him have because it was “his curse.” Something Clyde just interprets as his grandfather was a bit of a boozer. So he’s real proud of himself when he’s able to cook up a batch of this magical brew. His companion for all this is an ancient old crow who seems to have a connection to it. The shine does more than just give a person a buzz. It gives the maker the ability to steal life force from other humans. Clyde kills his girlfriend via shine and blues playing because he takes too much of her away until she’s gone. That brings him to his senses and he tries to destroy the dangerous set up. But Crow stops him and sets things up to wait for the next customer. Very cool riff on the whole making a deal with the devil at the crossroads thing that is part of the delta blues legends.

There are nineteen stories in Crow Shine which means this review has barely scratched the surface of the treasure within this excellent book that I highly recommend this to all our readers! All the stories are strong and the variety is amazing but stays on target. This will be a pleasure that you will read for years to come. Remember, things move fast these days, so grab a copy or buy an e-book of Crow Shine while it’s available.