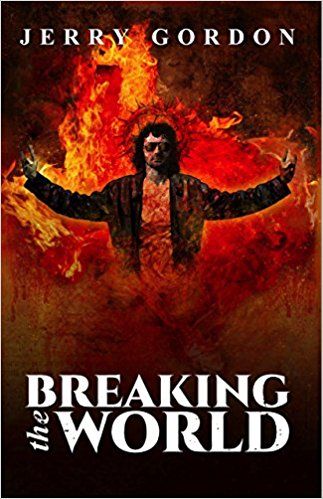 On April 19th Jerry Gordon and Apex Publications are bringing you the end of the world courtesy of David Koresh’s prophecies mixed with some cool fictional elements that will leave you hard pressed to identify what is real. Breaking the World kicks off during the legendary 51 day standoff between Koresh’s followers and the combined forces of multiple branches of law enforcement. Many of you probably remember all the news coverage giving us an outside view of the situation. But in Jerry Gordon’s book, we see things from the inside viewpoint of 15 year old Cyrus, a teenager who doesn’t believe in the gospel and would do nearly anything to get away from what he perceives as a bunch of ridiculous behavior. Too many rules, along with Koresh’s rather self-serving approach to marriage, fail to score many points in his eyes or those of his two friends Marshal and Rachel. During this maelstrom of craziness, Cyrus is busy falling hard for Rachel and wants a conventional monogamous relationship with her. All three of the teens are from broken homes and they need each other to stay strong through being attacked by what should be friendly forces.

I like how Breaking the World opens with a bang. Gordon puts us right into the action when Cyrus hears what he thinks are fireworks. As he runs to join the fun, he gets shot by the joined forces of the ATF and FBI just minutes before they shoot David Koresh. The smooth twining of facts and fiction is so well done by Gordon that the entire book feels real. You are there, seeing the world through teenage eyes and experiencing a lot of exciting stuff. I thought the description of Cyrus as part Holden Caulfield from J.D. Salinger’s classic work The Catcher in the Rye was well played. That desire to be cool but also afraid of the world is teenage males all over. Falling in love, yet fighting for his life in a situation that he’s not even sure he understands.

I also enjoyed how Cyrus begins to understand David’s prophecies. That is paired with the flip side of “Hey if the only people that get you are rebellious teenagers, how solid is your argument?” Gordon does this a lot throughout the book and I think that’s what makes it such a fresh read. You’re inside the compound being shot at, gassed, and attacked in all kinds of ways by people who claim they’re not trying to hurt you. Yet the self-proclaimed pacifists are armed and shooting back, which kind of throws their claims of being peaceful out the window. When the pandemic gets out of control, so does the government’s approach to defending the U.S. This creates a massive problem that no one except Koresh was expecting, so he’s the only person with a plan. The church is under attack from law enforcement, but something else is coming over the horizon with its eyes on the FBI encampment. Something crazy huge is going to happen!

And that, dear readers, is why you need to order a copy of Breaking the World stat! It’s full of cool cliffhangers and crammed with dope details that I don’t want to spoil. What I can say is that this book gets 5 stars plus for being so engaging. It is obvious that Gordon did a ton of research in order to make things so vivid. I very much enjoyed being able to see the humanity of the people involved, including David Koresh, who is regarded as a religious kook who took things too far. Through Cyrus, Gordon makes some really good observations about what happened. Revealing the redeeming qualities about these people is important.  No one is one hundred percent good or bad. Perhaps some of the ideology was okay, but when put through the filter of Koresh’s mind, turned sour. The desire to be a rock star never produces good results in public figures. Then with the addition of the apocalyptic fiction, I felt like someone who heard Orson Welles read War of the Worlds on the radio for the first time. This is powerful stuff! Another great book from Apex Publishing and stellar writing by Jerry Gordon. Get your copy TODAY!