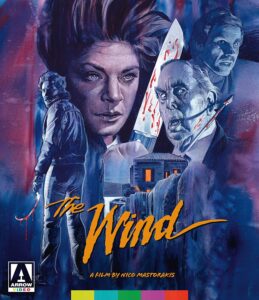 This was a first-time watch for me, and more to the point, I’ve never even heard of it before. Now it looks like a slasher (and appears to have been marketed as such) and it’s from 1986, so that’s right in my wheelhouse, and yet I never heard of it. How does that happen? Then it stars Meg (oh my God those eyes) Foster, Wings Hauser, and Steve Railsback. Also the production value looked to be surprisingly high, and the music is partially by Hans Zimmer. Once again, how come I have never heard of this movie? So was it a hidden gem, or is there a good reason this movie has remained so hidden? Well, grab your windbreaker, don’t worry about your hair, and let’s plunge into The Wind.

Meg Foster plays is a popular crime novelist who moves to a historic Greek village to write her next book, and she soon starts seeing murder everywhere. Well, more like one murder and one killer, played by Wings Hauser. Yes, this isn’t a mystery; we know from very early on who the killer is. As to why, well, that’s never given too much attention. I guess the idea is that the wind can make people crazy, which is the same explanation they gave for mad mad Marz in the underrated slasher Madman. So that was cool.

As for those slasher elements, well, there really are none. The Wind is far more a thriller that becomes a siege film, where Wings is after Meg and plays a cat and mouse game for the majority of the movie. That’s not a bad thing, as I like thrillers and I liked this movie, but I thought I would mention it here so people don’t go into this expecting something and come away disappointed. This movie is too good and too fun for that. It’s a “small” film, largely one woman in a house vs. one maniac with a sickle, but it works. When it does try to widen out, it kind of fails. There’s stuff in here about the woman’s husband in America and then some just married tourists that just sort of seem to take up time, but they’re not too distracting.

Let’s get to the extras on this new Blu-ray from Arrow Video. There is an interview with the director (and producer, writer, editor, and just about everything else) Nico Mastorakis, and boy, is he a character, and did he really not like Wings Hauser. And he is no real fan of Steve Railsback, either, who is also in this movie for a hot minute. Yeah, I really liked this no holds barred featurette. There is the complete soundtrack by Hans Zimmer and Stanley Myers on here as an isolated score. It has the alternate U.K. title and opening, called “Edge of Terror.” It was called that because the British kept making fart jokes over the original title. True story, Nico Mastorakis said so. Then there is the ever-present theatrical trailer, the 2020 remaster trailer, a gallery of trailers for other Nico Mastorakis movies, and a still gallery. Not a bad bunch of goodies for such a hidden movie.

The Wind is a pretty standard thriller with a great setting (the Greek island) and a fun premise (the ever-present wind that becomes a character in and of itself), and the actors do good work (even if some of their line readers sometimes feel off). So it’s a bit of an uneven thing, but it was a fun watch and I’m glad to finally make its acquaintance. Slasher fans may want to skip this one, but lovers of thrillers should get a kick out of this. So consider this a conditional recommendation.