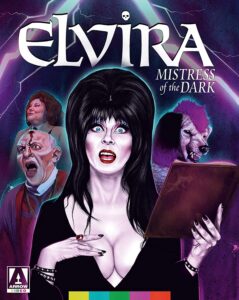 I love Elvira, the horror host with the most, and not for just the obvious reasons. Really, get your head out of the gutter. She is, and always has been, straight up awesome and hilarious. The fact that she is drop dead gorgeous is just a bonus. I wish she was still doing the hosting thing today, as I miss the hell out of her. So, Shudder, if you are reading this (and I know you are), hire her. You can still have Joe Bob Briggs, as he is awesome, too, but he’s not on all the time, so imagine how cool your streaming service would be if you had Elvira and Joe Bob trading hosting duties? I mean, why is this not a thing already? It’s a no-brainer!

But I digress. This was Elvira’s (the alter ego of Cassandra Peterson) first time leading a movie on her own, as in heading it up and having it be all about her. Befitting the Mistress of the Dark, it’s a horror comedy with a heaping helping of sex appeal tossed in for good measure, but just like the classy lady, things are always kept in good taste. Well, some kind of taste, but the movie is PG-13 so parents, don’t worry. Too much. But without further ado, let’s dive into Elvira. Uhm, I mean the movie. Yeah, that’s it.

Here the Mistress plays “herself” as a struggling TV horror host that gets no respect. Out of the blue she finds out that she had a distant relative who just passed away and left her some stuff. So she leaves the bright lights of the big city and goes to a very small, and small-minded, New England town where she gets a house, a little doggie, and a cookbook. Yep, a cookbook. Cool? But things are not as they seem, as there is a evil dude who wants that “cookbook” for nefarious reasons, and he’s willing to do whatever it takes to get it.

As for the comedy, it’s your basic fish out of water story, so most of the laughs come from there. However, that’s not all, as Elvira is just laugh-out-loud funny the majority of the time, no matter what she’s doing. True, there is no real horror in this horror comedy, but seeing the Mistress of the Dark in HD is all kinds of wonderful.

On to the extras and special features on this new Blu-ray from the always awesome Arrow Video. First of all, there are an impressive three audio commentaries on here. One is with Cassandra Peterson, and fellow actors Edie McClurg and John Paragon. The next one is with director James Signorelli and Tony Timpone, the former longtime editor of Fangoria magazine. The last commentary track is with Patterson Lundquist, the webmaster for an Elvira fansite. There is a director’s introduction at the start of the film and a lengthy making-of featurette, a featurette about the creation of the pot monster. No, it’s not what you think. There is an image gallery, a U.S. theatrical trailer, and a teaser trailer. So that’s quite a bit of bang for your buck, but I would expect no less from Elvira.

In this day where everyone on the internet loves big-tiddy Goth girls, it’s about time the queen of Goth girls gets her due. Again. If you grew up with Elvira, or just pine away for the all the cool things you missed out on, this is a movie for you. Consider it highly recommended.