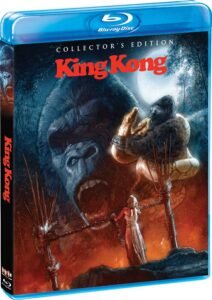 With all the attention from the recent MonsterVerse beatdown of Godzilla vs. Kong, it’s a good time to remind people of what came before. One of those films, the 1976 remake of the 1933 big ape original, King Kong, has finally got the big Blu-ray treatment by the always excellent Scream Factory. But is it worth it? I mean, there have been a bunch of Kong movies over the years, and not all of them were classics, or even all that good. So how does this one fare? Well, grab your pretty blondes, a bunch of bananas, and run to the tallest building around and let’s find out.

Here, because it was the 70s, they try to go topical and start off with the oil shortage and what extremes some people will go to for that black gold. You know, Texas Tea. So that’s what gets a ship full of people out to the mysterious Skull Island, they’re looking for oil. Charles Grodin is in charge of the oily expedition, Jeff Bridges is the very hippy-looking paleontologist stowaway because of all the strange stories about the island, and Jessica Lange is the beauty for the beast and a shipwreck survivor they pick up along the way. Then they get to the island, some monkey business happens, and before you can say Kong, the lady is with the big ape, Jeff is looking to save the girl, Charles is looking to capture the giant monkey because there’s no oil on the island, and poor old Kong is trying to get some play time with the lovely Lange, all the while protecting her from all kinds of prehistoric horrors.

Look, it’s basically the same story as the original. It is a remake, after all. Soon everyone is in New York, Kong gets loose and causes chaos, the ape grabs the girl again and scales the tallest building around, this time the World Trade Center. A showdown with some helicopters later and you get the unavoidable tragic ending. But what makes this movie worth a watch are the brushed up effects, the tight direction of John Guillermin, the good to very good acting by all involved, and the changes combined with the faithfulness to the original. It had to be scary to step into the giant ape tracks left by King Kong ’33, so I give everyone involved credit for doing it, and doing it well for the most part.

On to the extras and special goodies Scream Factory has put on this new edition of Kong 76. First, there are two discs here: one for the theatrical cut and one for the television cut. Now, even the theatrical cut is only rated PG, so there’s not a ton of blood, swearing, or nudity missing from the TV cut, but there are some changes made (mostly extended scenes done for television) so it is nice to have the option to watch in both ways. There are also two commentary tracks, one by Ray Morton, the author of the book all about King Kong history, and this one was very informative. The other commentary is by the special effects master, designer of the Kong costume for this, and the actor who played Kong, Rick Baker, and I just loved it. Then there are a bunch of featurettes and interviews of various lengths on all sorts of all things Kong. There are six of them, to be exact. Next there are a trailer, some TV and radio spots, and image galleries. Then the TV cut is split in two, as it was originally shown as a miniseries, and lastly there is a panel discussion about the film from the Aero Theater in Santa Monica. That is a monstrous (ha) amount of goodies for this release, but that is par for the course when it comes to Scream Factory.

King Kong is not as good as the original, but few films are. In and of itself it is a fun and, dare I say, good monster movie. Maybe because I saw this one before the original and it’s all cloaked with nostalgia for me, but I do love Kong ’76 and therefore I can highly recommend this new Blu-ray from Scream Factory.