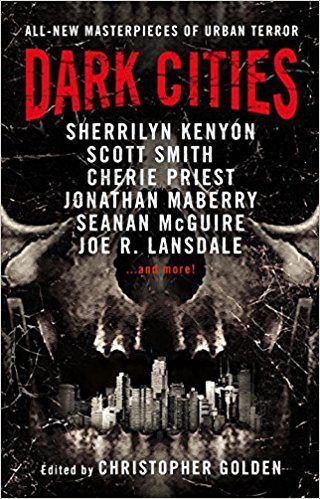 I really like this collection because everything feels so real and absolutely possible. While terror spans a wide style of approaches, including giant monsters or extremely freak events, these stories hit us where we live. Let’s face it, most cities at night are creepy places with lots of known threats such as muggers, drive-by shootings, sex traffickers, and dark alleys, just to name a few. Sure, the police do the best they can, but we can’t always rely on them to save us. Especially when it comes to the ancient supernatural forces that don’t always look threatening at first glance. They find it easy to hide in the vast populations of cities and under the cover of darkness might even pass as glamorous.

Such is the case in Christopher Golden’s The Revelers in which the main characters attend a huge after hours party in NYC seeking fun and excitement. At first, things are rowdy, sexy, and fun. But soon that morphs into concern and then terror on the narrator’s part when he keeps going into rooms that are way too large for the average city brownstone. Not only that, even the sky looks wrong when he finds a window. Where the hell are they, and why are there people in zoot suits mingling with young hipsters? How come the amount of drugs and alcohol never flags? While Tim is not entirely sure what this place and who the occupants really are, he knows that he and his friends need to get out of there. But it’s not that easy.

While we’re puzzling over strange apartments, let’s check out the one in Dear Diary by Scott Sigler. Sometimes you just find “your” place in the big city. In fact, it seems like maybe a particular place has been waiting just for you. Such is the case for a young man who moves into a place to be closer to his married girlfriend. The results are far from expected. The human romance fizzles as Robert becomes more and more infatuated with his very vintage apartment. He even begins to read and participate in a strange diary that has been left behind by previous tenants, all of whom disappeared one day and were never heard from again. Eventually Robert never leaves his apartment at all, preferring to spend his days wandering around it naked. Until one day, when he literally becomes part of the place. Is it possible for an apartment to be carnivorous?

Kasey and Joe R. Lansdale knock it out of the park with their piece, Dark Hill Run. A fella by the name of Johnny goes to see a psychotherapist because he wants to quit smoking. Little does he know that the pleasant and quirky doctor he goes to is about to dredge up a horrible memory that Johnny has kept hidden in his head. Johnny stops smoking all right, but sleep becomes a nightmare! As a side effect of being hypnotized, his brain has brought forth the miserable school bully who made Johnny into the great runner he is today. That’s bad, but what’s worse is that every time Johnny sleeps, his tormentor becomes stronger and more real. His doctor attempts to help him, but even though he means well, he can’t do much. Eventually, Johnny has to rely on the thing he’s always done. He runs like the Devil himself were after him. But he’s exhausted and his strength falters…Just as it looks like “game over” for Johnny, he gets some help from the bakery delivery truck driver who nearly runs him over every day. Very good punchline at the end! Some personal demons are not so bad when compared to what “cures” can bring out. Bravo!

That’s just a small sampling of the 20 excellent stories you’ll be enjoying when you pick up a copy of Dark Cities from Titan Books. I highly recommend this title! Remember, these are all brand-new stories from popular modern Horror writers in a strikingly handsome book that you will enjoy dipping into for years to come. Just one warning from Tim Lebbon’s In Stone, be careful of examining your city too closely. The city may notice you, and that’s not a good thing.