Night of the Unspeakable – Movie Review 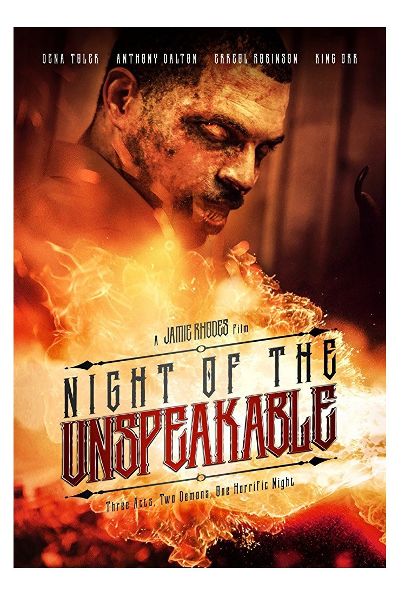 Night of the Unspeakable opens with an historical tale that spans seven thousand years. It tells of angels, innocents, warriors, and the repetitive demand of demons wishing to dominate all of mankind. When the Nicepherus is released from a sacred casket, he seeks to devour the souls of all who are inside a music studio with him and his diabolical pheromones.

I feel I have to give a disclaimer before my actual review. I do not wish to offend any of the hard-working people who made Night of the Unspeakable. There was money spent and many lines rehearsed and well, this is someone’s baby. I’ll do my best to be as respectable as I can, but only so much can be asked of me.

This movie was dumb. Yes, I know there are words that could convey my abrupt and infantile statement, but I don’t wanna. There’s a litany of reasons why I was disappointed with NOTU, but I’ll only itemize a few. First, I’m thinking the creator wanted to entertain viewers before the opening scroll, so he added a music video. Said video played all the way through, focusing on the bodies of the singers instead of actually writing a song worth listening to. Then came the opening credits. I was confused – issue number one down.

My second balk concerns everything concerning the cinematography, special FX, and acting. They were bad. They were all bad. There were feeble fight scenes, make-up could have been done better by my seven-year-old, and the acting reminded me of one of my high school plays. One of the bad ones. And don’t get me started on sound – so many scenes began low, then jumped so high you could hear the actors breathing, just to be lost again. And that “We Will Rock You” line… Boo! I wanted to laugh, but the fight scene that followed was cut off on the right-hand side of the screen. Two down.

I did laugh during one scene. The part where Nicephus calls one of the female characters a strumpet, a trollop, and a tart, and she took them all as compliments. Wow, that was good. Not the scene, just those lines.

So lastly, I found myself slightly offended – not when the movie ended, but when it had the nerve to post up To Be Continued. Please don’t. Let this movie go and find something else to do. Honestly, I think they should all invest in music. I don’t recall many scenes where someone wasn’t singing in a studio (complete with band name and song title), trying to perform. Though none will ever make the Top 1M, it would make a definite improvement. Done.

So, if you’re looking for a movie that wishes to run with bodily possessions during intercourse, half-jazzed, philosophical rhetoric, and weak baselines, check out Night of the Unspeakable… because this movie shall now be known to me as It Which Shall Not Be Named.